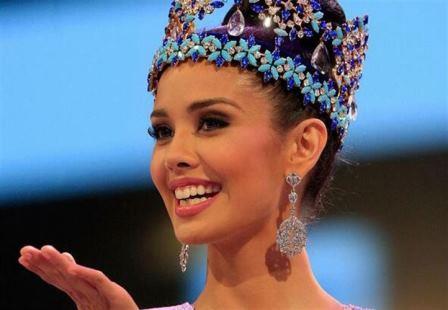 Megan Young is crowned as The World’s Most Beautiful Woman 2013.

The Actress and Model Megan Young Philippines has been crowned as the ‘world’s most beautiful woman’ on Saturday to win the crown of ‘Miss World 2013’.

In the event, held on the Indonesian island of Bali, candidates from 127 countries participated, of which the French Marine Lorphelin, ranked second and third Ghanaian Okailey Naa.

Young, 23 years old, is a student of film direction and has inherited the crown of the Chinese model Wen Xiayu, winner of the ‘Miss World 2012’.

The model will move to live in the city of London, England, – as usual – where the headquarters of the organization of the event, and will spend her year of reign visiting charity projects and social projects around the world.

The popular contest was held protests by radical Muslim groups forced the organization to move headquarters from Jakarta to Bali end, in addition to replacing the traditional bikini for a one piece bathing suit more conservative.