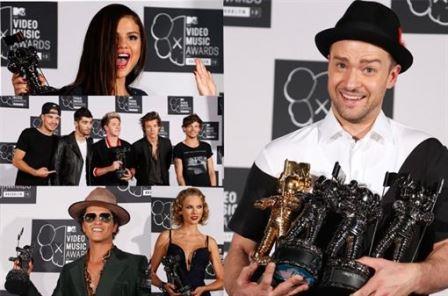 The big winner was Justin Timberlake. And the singer has taken the award for best video of the year for ‘Mirrors‘ and to top it off has been given a special award named after the legendary Michael Jackson.

In addition, Timberlake has had the opportunity to do a review of all their hits live for 15 minutes and refused to get off the stage without remembering NSync, the boy band that released him.

Meanwhile, Taylor Swift has won the award for best female performer video for her song “I Knew You Were Trouble” while Selena Gomez has been due to “Come And Get It” the award for best pop video . 30 Seconds to Mars has excelled in the rock category.

The rapper Macklemore and producer Ryan Lewis not go unnoticed with rendition of ‘Same Love’, an alleged gay anthem, which was awarded Best Video “with social message“. “The gay rights are human rights. There is no separation” proclaimed Macklemore to receive the award.

In addition, the duo also won the award for best hip hop video.

The members of One Direction also had a joy, and who were the winners in the category “Best Song of Summer” with the song “Best song ever“, which was created for fans to vote on Twitter for your favorite artist.

However, when he turned a little sour when Niall, Harry, Louis, Zayn and Liam took the stage to collect the award and the audience began to boo.

Behind the scenes, the very Lady Gaga approached them to tell them not to listen to people and gave their support. Something that not everyone can boast.

Undoubtedly, a night full of not only awards but eccentricities that have not left anyone indifferent.

Are you happy with the winners or change anything?