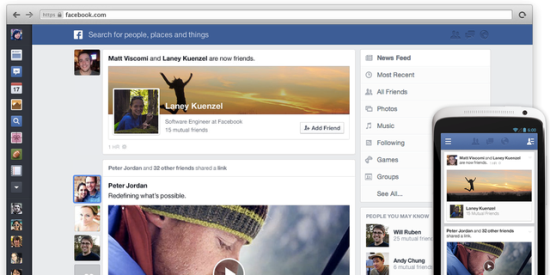 Facebook Continues to Reinvent itself: Know What’s New: It was from a vent between colleagues at the headquarters of Facebook engineers being brought in and after months of work modified the algorithm to allow the main updates are seen by the user, even if they have already been posted some time ago. Meet the main news from Facebook.

The update of the Facebook news feed has now been announced and will begin to be implemented globally, both on screen / computer screens as the official application for Android and iOS. The new algorithm enables major stories posted by friends and pages that follow appear first when we access to Facebook.

Post not seen Facebook, problem detected that conversation between colleagues is felt by all Facebook users. Each time a person accesses your news feed, there are at least 1,500 stories to see and it is humanly impossible to stay on top of everything, losing some important sometimes.

Given the scale of Facebook, the implementation of a new algorithm is no easy task. Lars Backstrom, the chief of the engineering division, said in a post that “when we fail to prioritize the stories and put them in chronological order, the number of posts visas and likes / enjoy and comments from users decrease.“

With the changes now placed, Facebook prioritizes up to 300 stories, which can be a picture of a friend or like a known or update a page. 300 stories in 1500 and the algorithm is much of Facebook does it for you automatically.

Automate the stories highlight so that they emerge in the news feed of users in the first place even if they have been posted for some time has to satisfy criteria very thin so that the best content is not lost.

At the end of the day, the purpose of Facebook is to “show the right content to the right people at the right time,” according to the definition of happy Lars Backstrom.

To achieve this, the algorithm now starts to set the news feed of users respond to signals given by the users. Ie, defines the main stories from the history of each one of us.

The algorithm “reads” the times we interact with a person, page or celebrity, the number of likes / enjoy, partlhas and comments in general and our friends in particular, how often interact with this type of post in the past, or if we someone hid or reported a post in concrete.

In practice, it turns out to be the user to define which stories will be prioritized, including those that will reappear on top of the news feed. For this purpose, it is – however – they need to be popular, ie, they “continue to have many like / enjoy and comment.”

With the algorithm now introduced and arrival at the top of the main stories, Facebook claims that interactivity demonstrated by users grows significantly.

In a test carried out recently from a limited number of users, the social network’s engineers found an increased interaction. Specifically, the number of gosot / enjoy increased by 5 percent, as well as the number of shares and the comments made by those organic posts.

A fact that will definitely please the managers of pages is that increasing the number of likes, shares and comments generated content to pages has increased even more significantly, standing at 8 percent.

This last issue is particularly important, since there is a 13 percent increase in the number of stories read by users with new functionality.

“The data suggest that this update does a better job of showing people the stories they want to see, even though they lost the first time. For page owners, this means that your most popular posts organics have greater chance to be shown to more people, even if they are more than a few hours old. Advertisers should note, however, that this change does not affect the way the paid content appears in news feeds, “reads the post of the chief of engineering of Facebook.

Social search (or graph search) is from today available to all users who utilize Facebook in U.S. English. This feature allows you to find people and pages from our relationships and can now be tested by all.

With the new type, the search becomes much more effective. If you are looking for friends who live in a certain place just have to do the research to the Facebook asking just that: friends who live in social network … and give you a listing of all those included the location you chose. Or they may ask why you’re tagged in photos or even by friends of friends who saw the movie X-Men. 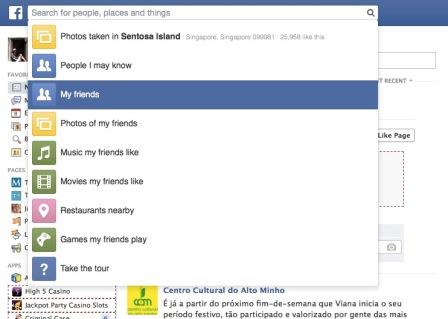 The options are endless and make it much easier to find people and pages according to the criteria that the user himself down. It is clear that for now only those who know English can use social research, but briefly the new features are present in Portuguese, or was not Brazil is the second country in the world in number of Facebook users.

And while the graph search does not reach the Portuguese already can test by simply changing the language of your account for U.S. English. 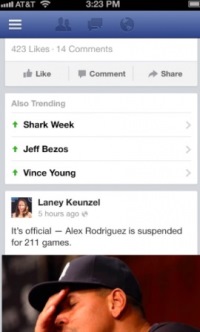 The news of Facebook are not exhausted in the news feed. The world’s largest social network has recently taken significant steps towards content aggregation and now announced that it is testing the appearance of popular topics, similar to what happens with Twitter and even Youtube.

Popular topics facebook now, only a small percentage of Americans who use Facebook through mobile devices have the right to test this new feature, but if it is successful the appeal will be expanded to all users. But not anytime soon. It is the popular topics is still very early in the test and there is still a long way to breaking.

The test of this function is to create some excitement, with many claiming that Facebook is “twitter up” and can thus deviate from its initial objective, which was to bring together people who know.

The first step to make that happen was to permit the subscription of personal profiles, through which people can follow the public posts of particular person without having to be accepted as “friends”.

More recently, Facebook has allowed the use of hashtags, making it possible to highlight and / or search for a particular subject.

The new Facebook News feed gives more prominence to the content. In its current design, there are two sidebars, one on the right with the activity of our friends and left with information relating to our account. In the new layout, the left bar disappears, being replaced by a much lower with icons.

That is what you waiting for?

To have a news feed with larger photographs and the content that counts just go to the page about this update and sign up. The new look is much more “clean” and minimalist and it is not surprising that the title of this page is the same “Goodbye confusion“. To register, scroll down to the end and click the button. Then just wait …

What is the Best Place to Advertise Online, Google or Facebook?