A Map Constructed Through ‘Tweets’ includes Restaurants Where You Eat (Fly in My Tweets): A group of researchers from the University of Rochester has resorted to ‘tweets’ with the intention of improving food monitoring customer on every visit to a restaurant and avoid poisoning and diseases favored by food. Thanks to information from Twitter have built a map that wants help improve public health. 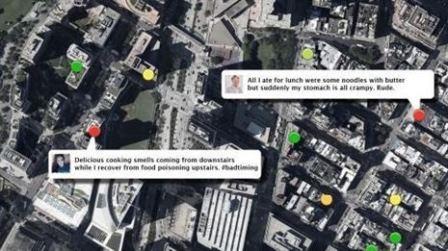 Nemesis is a machine learning service that generates a map of sites with potential risk to eat. Geolocates ‘tweets’ via GPS and compares it to the locations of restaurants of Google Maps of the area and users who have gone through that restaurant.

The tendency to express every feeling every minute on Twitter may have something useful for other people even helping public health.

Geolocates Nemesis ‘tweets’ via GPS and compares it to the locations of restaurants of Google Maps of the area and users who have gone through that restaurant.

Henry Kautz, a computer scientist explained this novel system that Nemesis works by combining machine learning and crowd-sourcing techniques to analyze millions of ‘tweets’ and has the main objective to find places where people suffer from symptoms food poisoning after a visit to the restaurant.

In a test in a period of four months, the system collected about 4 million ‘tweets’ from over 94,000 unique users in the city of New York, tracking to 23,000 visitors, and found 480 reports of poisoning probably caused by food , investigators said.

“Twitter reports are an accurate indicator, in some specific cases could be due to factors unrelated to the food in a restaurant, but overall the numbers are revealing,” they say in the study.

Ahi is the first major failure of this system since Twitter generates many ‘tweets’ per minute even second and this does not help but hinders you can access this data.

Source via There’s a Fly in My Tweets