iOS 7 Beta 3 Comes With Interface Improvements and Bug Fixes: The third beta of the new version of Apple’s mobile OS, iOS 7 is now available for developers. Two weeks after the release of the second bet.

Team Apple releases third in which interface improvements are added and corrected a number of errors found in the previous beta. iOS 7 beta 2 is available for download via iTunes or via OTA.

The New Home Screen, For the first time since the original iPhone, the overall look and icon structure of iOS is now new and fresh. 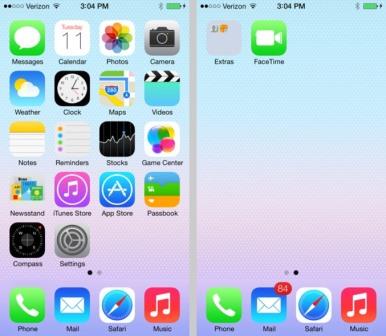 The wallpaper can now be dynamic or static. Dynamic wallpaper is similar to the animated wallpaper in Android, except it doesn’t interact with your finger. The default wallpaper is static.

After the presentation of the new IOS 7 WWDC last June, Apple developers are constantly working on it to get it ready for next fall.

To do this, and with the help of developers have already released two beta versions of the new version that solves the errors detected and gradually added new improvements. As every two weeks, Apple has released a new developer beta of iOS 7.

The beta 3 fixes a number of errors found in the previous version and also includes a number of improvements, as reported by Apple on its official website.

The changes that have been made in this third beta are, among others, a bigger status bar in lock screen, increasing response rate with Siri and a better voice, the folder icons are more transparent and various alterations in terms of user interface and the source of notification.

The Safari browser has also seen some significant improvements in user interface and via iPad markers in the loading bar for iPad and iPhone, as well as in private browsing mode.

The calendar application now shows what events there every day and controls have been redesigned in the music application.