Samsung New Mirrorless Camera: Mirrorless camera progress is expected to be the future of digital domains. And Samsung is likely to become king of this product line. 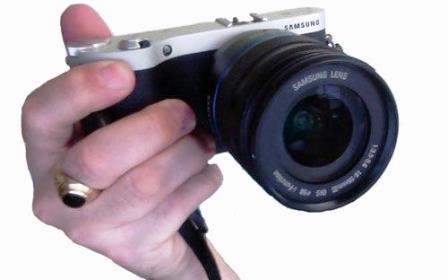 Upon emergence, the smart phone iPhone Apple has reversed digital world. In an instant, the whole idea of this field will disappear when the cult names such as Canon, Nikon and Kodak picture witnessed the market pushed to the brink. Then revolutionary DSLR and appears to be favored quickly.

Now is a time when the industry stands at a crossroads image. But the winner may not be Apple or bulky DSLR, which is probably the Samsung mirrorless camera category. This type of camera is not equipped with reflectors as the kind of DSLR but is also used as the lens DSLR camera.

Samsung is raising the target market leading mirrorless cameras worldwide during the period from 2015 after leading the domestic market for this product in Q4 last.

Data that Samsung recently announced that Samsung accounted for 39% market share in the market mirrorless camera in Korea in quarter 4/2012 more than any other competitor.

According to the latest data has been to present in quarter 3/2012, Sony accounted for the largest share of global mirrorless camera, reaching 46.5%. Samsung came in second place with 33% market share.

Aiming to become over Sony manufacturers mirrorless camera world’s largest, Samsung recently announced the addition of the production line of cameras in operation at the manufacturing plant at its main camera China.

Suk He added that sales of digital cameras compact compact form is on the decline in the context of digital phones and tablet computers become more popular. The current trend is that consumers switch to more shopping DSLR and mirrorless camera. Therefore, in the past few years, Samsung’s strategy of moving from compact cameras to popular mirrorless cameras have higher profitability.

Analysts estimate that consumers increasingly interested in reducing the types of point and shoot camera right because they have smart phones. That’s why manufacturers should be adjusted to meet the needs of users and targeting emerging markets.

He Deepender Rana, director of client consulting firm Millward Brown in the African region the Middle East and Asia-Pacific appreciated mirrorless camera of the Samsung Galaxy.

This camera is equipped with 3G, allowing users to directly image the social network. Mr Rana said that Samsung has cleverly used the name Galaxy for the camera, because this is the name used for the phone line to its cult.

Huffington Post recently reported an article appreciate mirrorless camera of the Samsung NX300. This camera is priced at about 800 dollars, with a 18-55 mm lens using the image sensor 20 mega pixel APS-C.

The quality of the image that the camera gives very sharp, but the highlights are the machines that support Wi-Fi network to connect to. With this feature users can easily share photos on Facebook or even YouTube video sharing network.

Thus a digital camera but the NX300 as a device is connected.

Choosing Ranging from a predetermined and you can Changeable Rate Mortgage

Having bear-shaped pancakes and much more, we’re more than-the-better crazy about that it teddy bear baby shower celebration motif!

Hi, over here! A term regarding the distraction

Reasoning #3: You reach pick a foreign spouse just who suits...