Nokia Announces First Microwave Oven “April Fools’ Day”: Google and Twitter are not the only tech companies that have posted jokes on the occasion of April Fools’ Day. The Company Nokia has “Announced a Microwave” with Title: “Nokia turns up the heat with its first microwave oven Nokia 5AM-TH1N6 Constellation brings innovation to the kitchen”, that features touch screen, eye-tracking and is capable of taking pictures of food and share them automatically. 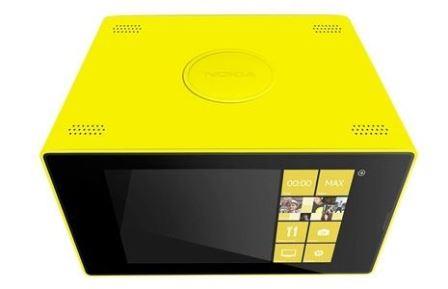 The Nokia 5AM-TH1N6 Constellation is the first microwave oven Finnish company and is a product that follows the design of their smartphones Lumia. Besides coming in different colors, such as “Cheese Cyan”, “lemon yellow” and “black licorice“, has a touch screen that displays the various programs or the operating time.

Among highlights innovative technologies eye tracking. Thus, the food stops spinning if the user gets to watch it and adjust the temperature depending on how hungry you look by facial expression.

The Finnish company has not specified, but it seems to work with Windows Phone 8 and some specific applications. By using these, special sensors and the new camera “PureView“-which in this case replaces the PureView the Nokia Lumia 920 – to take pictures of the food they are automatically shared on social networks. With the integrated application in the microwave, people can rate and comment the food immediately.

The microwave Constellation will begin shipping in the second quarter of 2013 with a price of 399 euros, according to Nokia. More models, including a smaller modification aimed at users with “less appetite” and another version with a 10-inch screen “that is not addressed to any particular consumer profile”.

Nokia has previously worked with microwave radio for their smartphones, so it was “a logical step” development of this furnace, said the director of innovation for the company’s home, Olavi Huhtikuu, explains in a Finnish joke press release published on the occasion of April Fools’ Day.