Samsung Galaxy S4: Open a Shipment of Galaxy S4 Before its Launch: According to the Examtech, one of their friends in China, who seem to have cracked open a shipment of Samsung’s Galaxy S4s before everyone else. There are two of the S4′s key new features revealed: Floating touch and SmartPause.

SmartPause is an extension of SmartStay — a face-tracking feature that debuted with the Galaxy S3. 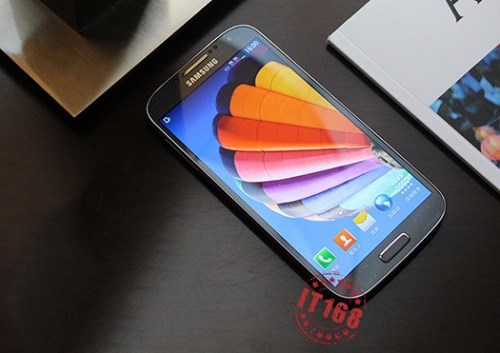 A smartphone that’s essentially the same as the Galaxy S3, but a little bit larger (4.99-inch vs. 4.8-inch display) and quite a lot faster (four Cortex-A15 cores and four Cortex-A7 cores vs. four Cortex-A9 cores). The S4 will receive a few software tweaks, but I suspect that SmartPause and floating touch are the standout features.

The company Samsung has everything ready for the arrival of what will be its new flagship, the Galaxy S4. For now, the South Korean company has not confirmed or denied any details about the new terminal, simply shown a somewhat gloomy picture of the device and two videos about the event. It was not until 19:00 pm in New York for details.

Samsung has become one of the leading manufacturers of mobile devices has managed to cope with the giant Apple, “stealing” market share. South Korea’s devices using the Android operating system and equipped with the latest features in terms of processor, screen or camera.

In May 2012, Samsung introduced the world to its Galaxy S3, a new ‘smartphone’ with one of the largest screens on the market to date, 4.8 inches. This new terminal will become the new flagship of the company to meet its competition and get to be number one in the market. Two months after its introduction, the Galaxy S3 broke the record of 10 million units sold worldwide, and in November reached 30 million.

However, Samsung wants to remain a leader in the market with its Galaxy family and the philosophy of other giants like Apple has proposed to launch a new handset of this family each year, not to mention the ‘phablets’ and ‘tablets’ of Note family. Thus, in New York on Thursday Samsung will welcome the successor of its new flagship.

So far Samsung has not revealed any data about the terminal specifications. However, a number of reports over recent months suggest that Exynos processor will have a 5 Octa with two groups of four cores or Exynos QuadCore 5450 with the model that keeps the system seen in the Nexus 10 with two cores additional.

In addition, 5 inches and include Full HD, 2 GB of RAM and a revamped user interface, like the models presented by competitors. According to recent reports from analysts, this year Samsung seeks to produce 100 million units of its Galaxy S4.

To warm the environment, Samsung has offered users little pills on the event this afternoon in New York. On one hand, last week offered the first promotional video about the event which told the story of Jeremy, the boy chosen to be the first to hear the new terminal.

Jeremy’s story continued this week with the second part of the video in which the child was the first to see what the new Samsung device. Along with the video, the company presented a photograph, something dark, the new terminal. It could be appreciated only slightly curved lines design ‘smartphone’.

Samsung also organized a Flash Mob in Times Square with dancers who promoted the event to be held this Thursday. Along with the media, users can follow the event through its Samsung official channel on Youtube in ‘streaming’ or through one of the giant screens of Times Square.

Although it is unclear what the benefits of the new Galaxy, Samsung has before some rivals are not going to put it on the market at all easy. Two of these rivals are Sony and HTC with their smartphones Xperia Z and One, respectively.

The Sony Xperia Z is the main model in its high-end and, therefore, the company has opted for a new design that departs from previous versions as far as lines or curves refers light band. In addition, it has provided power, good camera, memory and a large 5-inch screen. And, anyway, is the fact that is waterproof.

Notable for being lightweight, 146 grams, and thin, 7.9 mm. Both the back and front are made of anti-shock and anti-scratch tempered glass, a material that is also built into the sides. It features a 5-inch screen, 13-megapixel camera, Android 4.1 Jelly Bean, quad-core Snapdragon S4, 2 GB of RAM and 16 GB of internal memory with microSD expandability.

Meanwhile, the flagship of the Taiwanese HTC, HTC One has a capacitive screen Super LCD3 4.7 inch Gorilla Glass 2 technology. The HTC One incorporates a model 600 quad-core Snapdragon 1.7 GHz, 320 Adeno GPU and 2 GB of RAM. It also has Android version 4.1.2, UltraPixels 4 MP camera, offering catches of 2,688 by 1520 pixels and is capable of recording video 1.080pa 60 frames per second, and a camera on the front with 2.1 megapixels.

The Xperia Z is now available on the market for 699 euros while the Taiwanese HTC One come along this March. Two strong rivals to which Samsung will face.