BioShock Infinite: “We Want An Emotional Relationship with Elizabeth”: If you suffer from hydrophobia, we hope at least you’re not acrophobic because the third installment of Bioshock also going to choke. 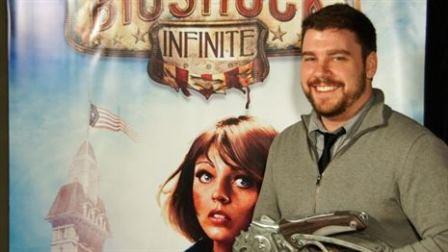 Irrational Games Infinite readies for launch on March 26, a supply that will change the deep ocean where Rapture was located where the sky is Columbia. This move, the context of the city and will be the main character Elizabeth keys.

Think you can develop feelings for a virtual character? That already was a question that could have been made in the first Bioshock, you were an example of moral decisions made in games. The Big Daddy and Little Sisters inseparable became the icon of the franchise and the player was holding often the lives of these characters. Let live or run these small-and creepy-usual girls was a crossroads in Rapture, which conditioned our way to the end of it.

In this installment is Elizabeth who will test our feelings. It’s 1912, Booker DeWitt has been mixed with the wrong people and the life of this veteran of the U.S. Cavalry hangs in the balance. In Columbia, a floating city in the clouds, their salvation is enclosed. In Infinite DeWitt will assume the role of a mercenary who must rescue this mysterious girl floating city of Columbia to settle a debt for the unknown player.

Elizabeth is a mysterious girl from her childhood locked in this huge floating prison. Forced to trust each other, Booker and Elizabeth forge a “strong link” during his flight, says 2K Games. Together we will learn to take advantage of a growing arsenal of weapons and abilities in combat in first person, in which no shortage of impossible jumps and dizzying flight through the use of zeppelins or Skyhook, a hand tool that will help us slide down Railers connecting the different parts of the city.

Irrational Games, the studio that developed Bioshock, wants us to fight through the clouds without taking the eyes off Elizabeth, we run for it, fight for it and suffer for it. That is the “heart” of the adventure. “We want to know if a player can establish a true emotional relationship with Elisabeth,” says the writer of the play, Drew Holmes. “It’s unprecedented, have not seen any other character like this,” he says.

COLUMBIA IS ABOUT TO EXPLODE

Another feature of Bioshock was the setting and the scraps of history that we found around town. A song, a poster, a toy, an audio recording … even enemies, living fossils of a society that was disgraced, helped us discover the utopian past and the present awful Rapture. All that we find also in Columbia. The first few minutes walking around this city and allow air check.

What has been lost is the spirit of Infinite dystopia of the previous two installments, in which the player was conceived as a perfect world, but it ended up being a living hell. In Bioshock, the player will attend the change of the city, the birth of a revolt, it will move by Live and direct, and that will be one of the keys of the narrative. “We wanted to go further and that the player is involved in the development of the world,” says Holmes.

Despite these changes, Irrational has respected the essence of the action of Bioshock, with a combination of weapons and powers for combat. Plasmids give way to calls vigours. The result will be similar: Booker can throw explosive fireballs, shoot rays or release a pack of crows murderers. We may also combine with the environment and shoot electricity electrocute a pool and so many enemies at once, for example.

And thanks to Elizabeth can open spatiotemporal gaps that seem inspired by the acclaimed Portal never enough. In half the battle can open spaces in time to transform the battlefield and change the fate of the battle bringing out weapons, turrets and other resources of nowhere.

Furthermore, in Irrational not have settled for giving a twist to the atmosphere and the development of Bioshock. For more experienced players, the studio has created mode 1999. Once finished BioShock Infinite will unlock this mode, allowing experienced players to enjoy the kind of “extreme hardship of the first games of the twentieth century.”

Developed by Irrational Games and published and distributed by 2K Games, Bioshock Infinite will be available for PlayStation 3, Xbox 360 and PC on March 26. It will have a PEGI +18.