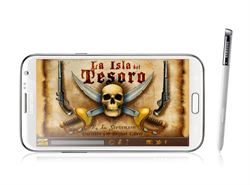 The Classic Treasure Island: The Samsung app store, Samsung Apps, and Antena 3 announced the launch of the application for Treasure Island ‘smartphones’ and ‘tablets’. This application, created by Touch of Classic, is the first of a series through interactive games and let you know the great classics of literature.

Treasure Island, a source of inspiration in various fields such as film, comics and video games, is coming to the world of applications and as a result, most exciting stories about pirates, as Robert Louis Stevenson imagined them, are make possible interactive mode.

This app becomes the first of a series of applications inspired by the classics of literature, to be followed by other titles like Frankenstein, Dream of a Summer Night and The Adventures of Don Quixote de la Mancha, whose purpose is bring the most important works of classical literature for children.

Users can experience firsthand this adventure, becoming Jim Hawkins and his friends confronted with significant challenges and puzzles to defend the treasure map and complete the final adventure.

The new app features stories in English and Spanish performed by professional actors and accompanied by illustrations and original music synchronized with the atmosphere of each scene for children.

One of the functions of the application is the option that the user can record a voice and interact with characters and some story elements. Moreover, when you download the application on Galaxy Note devices users can use the S Pen and decipher puzzles more accurately.

This application is available in Spanish and English in more than 160 countries and can be downloaded for free until June 2013.