Meteor Hits Russia: The 17-meter meteor yesterday left more than 1,200 injured in the Russian province of Chelyabinsk in the Urals, released energy of 500 kilotons, about thirty times the Hiroshima atomic bomb, according to the U.S. space agency (NASA). 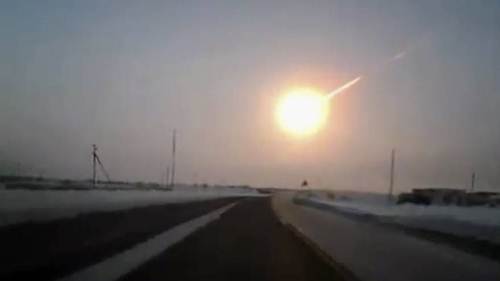 A meteorite streaked across the sky and exploded over central Russia on Friday, raining fireballs over a vast area and causing a shock wave that smashed windows, damaged buildings and injured 1,200 people.

“An event of this magnitude occurs once in 100 years on average,” said Paul Chodas, program associate of near-Earth objects at the Jet Propulsion Laboratory of NASA. “When a fireball is that size, many meteorites can reach the surface and is probably here already done several large,” he said.

Infrasound data collected indicate that the fall of the meteorite, since its entry into the atmosphere until the breakup, lasted 32.5 seconds, and its signal was picked up by eleven of the 45 monitoring stations located in 35 countries. His career, however, was very different from the asteroid 2012 DA14 that some hours later passed near Earth, so scientists dismiss their relationship.

Experts of the Russian Emergencies Ministry still looking fragments of the bolide that according to one hypothesis, may have fallen into the lake Chebarkul, near Chelyabinsk. A group of six divers are responsible for checking this version in the next few hours, reported the spokesman Emergency Rossius Irina, the Russian state news agency, RIA Novosti.

The Russian Emergencies Ministry estimates that the injured reached 1,145, mostly mild, although 50 people required hospitalization, including a 52-year fracture of two vertebrae which was transferred on Saturday in a special plane to Moscow. The Home Office mentions the figure of 1,200 wounded.

According to last minute, the fireball burst windows and caused other damage to more than 3,700 residential buildings and 700 public facilities. The total area of ​​broken glass reaches 200,000 square meters.