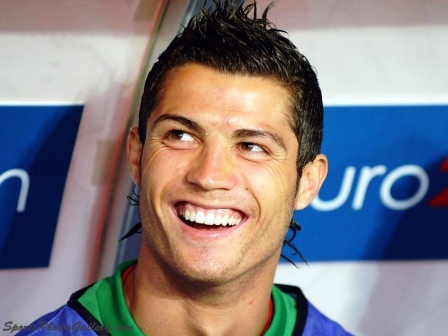 His professional and personal life have achieved stability that has made the Portuguese can be happy but up to this point Ronaldo has had to overcome a series of obstacles.

His fame spread to all corners of the world, and is loved and hated in equal measure. Global icon, Ronaldo has to deal with supporters and detractors, but this fails to affect your mood. He is the best player in the world or at least one of them which causes the number amounts to millions of fans, but also generated hatred by the opponents.

In a video interview with the British newspaper The Sun, Ronaldo has had no problem in telling it which thinks. Criticized by many for his words when after a clash erupted against Dinamo Zagreb, where he said, with bloody ankle, “I whistled for being handsome, rich and good. I have envy”.

Ronaldo  is far more humble what we want to believe.

At 28, and after becoming a father, Christian is a very mature player who is very clear what is important in your life. “I will not say I do not worry the money. Money is important, of course, but not the most important, is not my priority,” said the Portuguese.

And so, after a while playing the player has managed to define its priorities. “When I was young and playing for Sporting Lisbon thought – do not pay me enough and I want to buy this or that – but when you get to a certain point in your life money is not what motivates you.”

Everyone knows that Cristiano Ronaldo is the first to arrive and the last train to be – coaches and teammates can confirm – and as he says Money is not what motivates me to play or train every day, but try be better each time. This is probably the main reason that the player has become who he is, a player ten.

His way of being or acting, his reputation as “cocky” make many think is a silly boy who wastes the money, but the reality is that for him it is not economically or materially but the health or the love. When people crashed his Ferrari shouted to the sky but his conclusion on the issue is much simpler.

When asked about the accident the Luso says “To be honest the car did not bother me, I worried my legs when I jumped out of the car I smiled because I thought” I’m fine”. The car does not matter, what matters is your life. And is that as the player says “Crashing a car is something that can happen, you can smash an Opel or crashing a Ferrari.”

Being Cristiano Ronaldo has advantages and disadvantages, but the Portuguese said that it is better to be “Being able to do what I want and be happy with my life. I have a very good life and a great family.” But it also has worst part, “Being too famous. Thus Being famous is not good, it is very difficult.

There are too many bad things about being famous, you can not have a normal life. The Portuguese says he misses certain things like “Go outside, go shopping or just do what I want” because fame makes Everybody recognizes me.

Everything has a good side and a bad side and Christian knows, but luckily now life smiles. “I’m a Real Madrid player and I am very happy here, so is my family and everything is going very well here” and is that Christian has no future plans because “Only God knows what will happen.”

By the time Cristiano is happy with the club, with his family and with his partner Irina Shayk who does not see as much as you like for work, but who has a relationship with for years.