The Worst Dresses At Golden Globes 2013: Sienna Miller, Lucy Liu and Halle Berry: The gala of the Golden Globes are often made of very glamorous, many trends and much poise. But not all famous fall short of these circumstances. While all the stars have personalized advice which includes the choice of dress, makeup, hair and jewelry dislumbrar chords at the gala, not all were able to make good use of these tips. 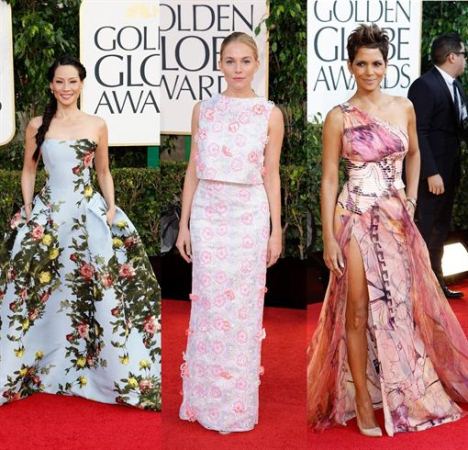 This year we have had a few surprises. For example with Sienna Miller usually has accustomed us to go flawless and radiant, this time we did not like the choice of two-piece dress with pink flowers shaped ornaments and red roses.

Another has not been taken advantage tonight was the actress Lucy Liu with a pretty floral dress too vivid hues and a big drop in blue.

A regular on worst dressed lists is the actress Helena Bonham Carter as always shows her strong personality with some of the most original costumes, but very little glamorous. For delivery of the 70th edition of the Golden Globes chose a black dress with tulle and fall into the arms fit.

Complement chose a red valentino handbag heart shaped. As always gave a touch of humor when she appeared on the red carpet with her husband, director Tim Burton, both with the same sunglasses.

Halle Berry does not hit much in the asymmetrical dress you chose. Not for the color, tone salmon with purple accents, or by geometric shapes that had the dress. Of course the side opening, hairstyle and makeup if it was right by the actress.

Also actresses like Emily Blunt with a gold colored suit favored not by their skin tone, or Kelly Osbourne too tight in a mermaid costume and hair color with a very unflattering got very black point in this issue that was marked by good overall styling.

A Great theater of the world puts music to Calderon de...