Argo is Imposed on Lincoln in The Golden Globes 2013: The film Argo surprised at the awards ceremony of the Golden Globes in Los Angeles, to be with the awards in the categories of Best Drama, an award they have picked George Clooney and Grant Heslov as co-producers, and best director, which has fallen Ben Affleck on. 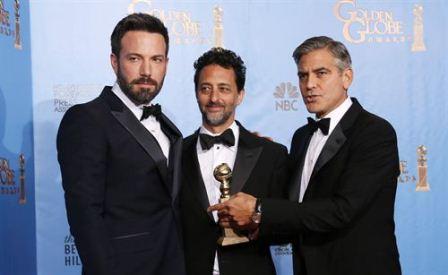 The film, which deals with the performance of a CIA agent during the hostage crisis in Iran, has snatched the Golden Globe for best drama at Lincoln, a biography of the legendary U.S. President directed by Steven Spielberg, who has left with the prize for best drama actor, for Dabiel Day Lewis in the title role.

Another of the winners of the night, Les Miserables, based on the novel by French writer Victor Hugo, has won the Golden Globe for best comedy or musical and was also awarded the best supporting actress, Anne Hathaway the role of the prostitute Fantine, and best actor in a comedy or musical, with Hugh Jackman in the protagonist, Jean Valjean.

The last of Quentin Tarantino, the ‘western’ Django Unchained, has won the Golden Globe for Best Original Screenplay and one for Best Supporting Actor, which has fallen on Christoph Waltz.

For the rest of tapes, the Australian Amour, which tells the story of an elderly couple, has won the Golden Globe for best foreign language film and Brave, Pixar’s latest creation about a young Scottish princess, has been considered the best animated film.

Other proper names were Jessica Chastain, who has won the award for best actress drama for the darkest night, the fall of former Al Qaeda leader Osama bin Laden told by Kathryn Bigelow, and Jennifer Lawrence, best actress comedy or musical for the bright side of things, based on the novel by Matthew Quick.

In the music category, Skyfall, starring singer Adele and Paul Epworth composed for the movie of the same name – the latest installment of James Bond – has been considered the best original song. Mychael Danna, meanwhile, has received the Golden Globe for Best Original Score for The Life of Pi, which has the wreck of a young Indian with a Bengal tiger.