Top Five Most Kpop Artists in 2012: Psy, Busker Busker, SISTAR, Super Junior and Big Bang are the Five Hit Names of the music industry in Korea this year 2012. 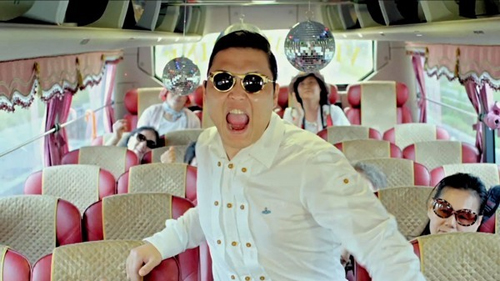 Based on data from the music charts, online charts and album charts and statistical views on Youtube, OSEN brought out five names top Kpop 2012.

No doubt when Psy top names with Gangnam Style dominate both Youtube and the music charts large and small, domestic and foreign.

SISTAR is a name that can not be ignored after the 4 girls “Level Up” by two consecutive hit Alone and Loving U. The last character in this list is the Big Bang with album Sales Crisis.

At WMAs Awards 2012 on 20 upcoming, Psy pocket to 3 nominations with Gangnam Style: The best song in the world, the world’s best video and male artist in the world. Particular, Gangnam version of the Style and HyunA also made the list of nominees for Best Video world.

Dave Grohl films the essence of the ‘Sound City’