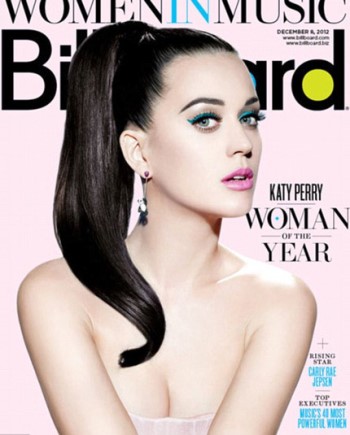 Katy Perry had an unpleasant year with a series of personal problems in life, especially to mention the brief marriage to comedian Russell Brand and its implications. She stepped an age 28 with The Billboard: “I am very happy, I am still alive. And the last 27 years really is a year full of challenges. “

Appearing at the Billboard Awards on 30/11 last, Katy Perry looks so elegant and fresh with a pink dress. She happily chat with the colleagues present at the awards ceremony in New York.

Katy said: “I think, my 2012. This award is really a great encouragement and lovely. I have seen many celebrities such as Beyonce, Taylor Swift and many others received this honor and I follow “.

Katy Perry Teenage Dream album release in 2010, and her two platinum albums has won number one song on Billboard’s Hot 100 chart. In 2012, this beautiful singer continued to release new album with two hit. With their successful harvest in the past year, Katy has to thank the fans, as well as profound gratitude to the mother.

New Star Award in 2012 by Billboard and was given to singer Carly Rae Jepsen Call me maybe hits. Carly said she was very happy and surprised by the success achieved.