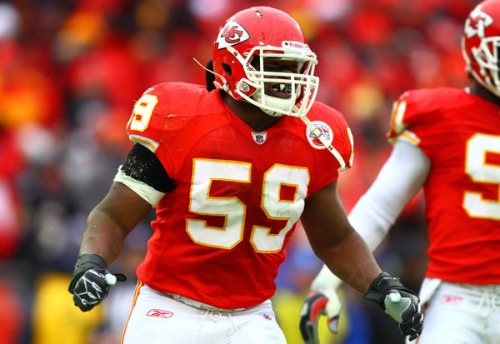 Jovan Belcher Kansas City Chiefs Football Player Murders His Girlfriend And Suicide Before His Coach:  Jovan Belcher, player of the Kansas City Chiefs of the National League of American Football (NFL) was shot dead on Saturday at his girlfriend and then was moved to the stadium where his team plays and committed suicide in front of his coach and the manager of the club.

By the time the reasons are unknown for this event, although the police have revealed that Belcher and his girlfriend, with whom he has a young son, had recently discussed, as recorded by the television network Fox News. Belcher was 25 and was from New York.

Apparently Belcher shot and killed his girlfriend and traveled by car to the parking lot of Arrowhead Stadium in Kansas, where he met with the club’s general manager, Scott Pioli and coach Romeo Crennel, who thanked them for their work before shooting himself, explained a police spokesman Darin Snapp.

That’s when he received a call from the home of the Kansas City Chiefs. “The description matched that of the other direction. Knew what we were facing,” said the policeman. When officers arrived, the player had stood in front of the entrance to the stadium, “pointing to the head with a gun.”

“Pioli and Crennel and another trainer or worker apparently were standing there talking to him. Seems they were talking with the suspect. Began to walk away from coaches and players and that’s when they heard the shot. Seems committed suicide” Snapp has reported.

According to the police, the coaches say that at no time felt threatened. “They say that the player was actually thanking them for all they had done for him. Were talking with him when he left and went off,” he added.