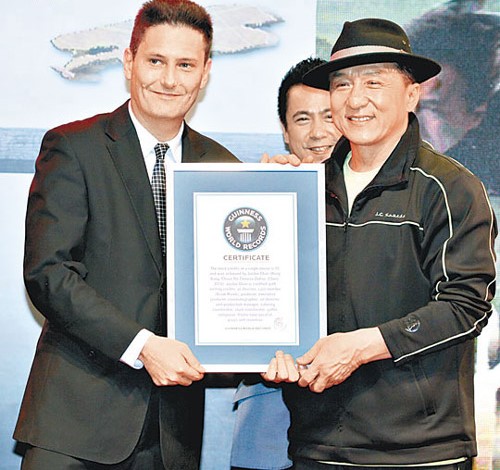 “Double the pleasure” of Jackie Chan. Not only was he opened the gallery Jackie Chan Film in Shanghai, but it was the next day he received two certified Guinness “Contemporary Actors with the most action adventure” and “take much of a role in a movie. “

A 12 animal, Jackie take up to 15 roles. Not only is the main actor, he was involved in all stages, from the producer, writer, director, cameraman, art director, who coordinated the action scenes, writing music for film, theater, stage props …

A 12 animal is the last action film Jackie Chan’s career. Hong Kong star said that he was no longer in the age of “playing” with their lives and health.

Maybe so, but Jackie Chan has devoted enthusiasm for the film. In a previous interview, Jackie Chan is confident that the action scenes in his new film will give the audience a sense of “suffocation” and more attractive than the dance scene on the tallest building World Burj Khalifa of Tom Cruise in Mission Impossible 4.

Share in the Guinness, Jackie Chan said he is not “Superman” but simply want to do a good job and get a glorious career.

“I have received two Guinness.” Contemporary Cast perform most action adventure. “Today, I think I deserve this recognition. Given what to do, I progeny can be proud of and told the audience that “This is Jackie Chan, Jackie Chan!” star Hong Kong blog confided.

Jackie Chan’s 12 animal will officially open in theaters on 20/12.