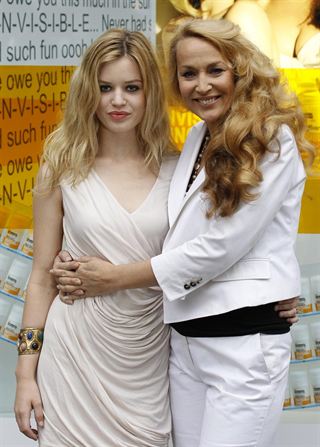 Georgia May Jagger Just Like Her Mother: Georgia May 20-year model, known for being the daughter of the famous Singer Mick Jagger, the campaign starring ‘Mother’s Day 2013’ signature Sunglass Hut. But Georgia does not single, but precisely in the company of her mother, Supermodel Jerry Hall. She is presented as a true reflection of her mother and surprising resemblance.

Long blond hair, sharp features and spectacular green eyes define the model, but it is not known which of the two because both have those enviable features.

For this reason the American firm of glasses wanted to have them as a couple to star in campaign of Mother’s Day, since not only their physical appearance is enviable, but their relationship is too, as noted Fabio D ‘Angelantonio, director of marketing for Luxottica to Daily Mail “The mother-daughter relationship that keep Jerry and Georgia is very nice, and that’s what we emphasize in our campaign.”

“It looks perfectly like Georgia style comes from her mother and as the style of Jerry continues with her daughter,” said D’Angelantonio. And is that what you have done similar styles that both have worked together on several occasions in addition to this, such as the campaign for the Australian firm of sunscreen Invisible Zinc, or for the Swedish brand H & M.

Despite having worked together on several occasions Georgia says the Daily Mail that “My mother is a fantastic model, I always get nervous when working with her.”

Despite the nerves of the young model her mother is very proud and has told the publication that “Georgia is very good model” and says she has always advised to “be on time and be beautiful forever” is the best way to be a good model.

Hall finished breaking her shell and spoke about her daughter not only as a model but as a mother, and wanted to point out that “Georgia is always very busy, so it’s good to spend time with her“, and that the family is Jagger- Hall is characterized precisely why not stop for a minute of work, is that the example you have at home, Mick Jagger still climbing on the stage at age 70.

The Queens of Superbowl: Beyonce And Alicia Keys