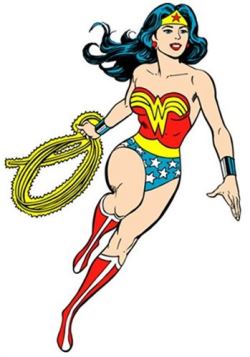 CW Is Preparing A TV Series Wonder Woman: CW, the U.S. cable network, is preparing a series of Wonder Woman, Wonder Woman and Warner Bros. TV, the studio behind the project, have already begun the casting to find the actress who will play the heroine.

However the CW Wonder Woman will be a little different from DC Comics. In the comics, is Princess Diana of the Amazons who decide to come to our world to help with his powers to mortals. Instead, Iris has been renamed-as-is from a remote and isolated country where he has spent all his life as a soldier.

Iris will have to adapt to their new environment. Will be happy and at the same time horrified by such everyday things as skyscrapers, traffic or ice cream. In addition, Wonder Woman has no experience in relationships, so it tends to do and say exactly what he thinks, becoming brutally honest.

The performers who want to give life to this character Wonder Woman mixture and Crocodile Dundee in Los Angeles have to meet two requirements: measuring at least 1.73 m and no more than twenty short years.

The CW is not the only recent attempt to resurrect Wonder Woman to the small screen. A few months ago NBC wanted to do a series about the character.

The actress Adrianne Palicki was chosen, and even got to see the performer in the costume of heroine. However, after filming the pilot the chain decided to cancel the project.

Despite the failure of NBC, not surprisingly, CW bet on the superhero. Arrow, the last character from DC Comics who has led the chain to the small screen is a great success and already has a handful of faithful followers to his adventures week after week.

We could also see Wonder Woman on the big screen. It would be in the film of The Justice League, hit theaters in the summer of 2015 and will face its biggest competitors, Marvel’s Avengers, whose second feature will be released in May of that year.