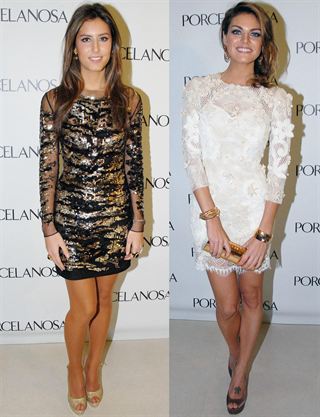 Amaia Salamanca And Ana Boyer Look Stunning: Last Thursday marked the inauguration of the new store in Seville, there were two hot Ana Boyer and Salmanca without her partner Rosauro, since both are signature image.

Alba is unstoppable, if a few days ago was in Madrid to inaugurate her exhibition “The legacy of the house of Alba ‘, on Thursday and was back in Seville to attend the opening.

Always accompanied by Alfonso Díez told us that it was haunted Sofia exposure. The Duchess was happy because Sofia and she showed great involvement and were chatting about the points they have in common such as music, art and news.

Anne Boyer, a worthy heir to the beauty of her mother Isabel Preysler, was radiant in a sequined dress and a black and gold peep-toes in golden tone. She said that her father is “better” and that Christmas is going to be “very quiet, family home, with my mother, my grandmother, my cousins ​​…”

With regard to the devotion of her sister Anne said: “I respect that she is so religious.” Its main project for 2013 is “finish college and then we will see.” she also assured that loves anything, “alone”, Anne said.

Quite the opposite Amaia Salamanca, who spends a great personal moment with partner Rosauro Varo. The actress was very pretty with a white lace short dress with gold accessories.

She said about her secret to be so beautiful is “Be happy, nothing else” and “being very much in love, of course.” Still would not confirm that 2013 was the year of his marriage: “I do not know, I do not know ...”

Jose Maria also attended the inauguration and is expecting her second child happy: “My wife and I always have liked many children and extended family would like to be God willing.” The bullfighter is Rocio explained that very well and that the pregnancy is “phenomenal.”