Windows 8 Debuts Its First Virus After Release: One week from Windows 8 release to the public and Windows 8 already has a virus designed specifically for it, which has been all over the Web Propaganda According Trendmicro Security Company, the malware that is causing chaos in the new OS is a Trojan and takes the form of antivirus. In addition, the company has warned users of the websites offer free software. 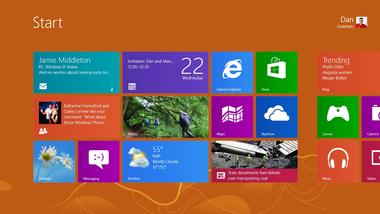 The activity of this malware was detected in the days before the holiday of Halloween, the Internet security company TrendMicro. The company noted that there were two threats designed for Windows 8, a typical ‘FakeAV’, which took the form of an antivirus and an attack of ‘Phishing’, caused by a malicious file contained in an email.

The “Malware” was a Trojan named ROJ_FAKEAV.EHM. This took the form of a banner antivirus and sent a warning to Internet users, claiming that a virus had invaded the system. So, getting that Internet installment of an application to remove the computer, which was actually the virus itself.

This type of malicious files track the computer for passwords, bank accounts and other relevant information that can be sold on the Web In this case gravity is not known the extent of the virus.

Furthermore, Trend-micro noted that this was in malicious pages, ie those that do not have safety certificates.

To avoid such incidents, Microsoft has a proper antivirus, Windows Defender, which is pre-installed in the software package. This disappears when the user installs another antivirus.

However, the novelty of the software, in terms of its interface and its method of use, makes users more vulnerable than before to threats of “Malware“. This weakness is an opportunity for hackers, who are already developing malicious files to Windows 8.

Furthermore, Trendmicro has detected an attack of ‘phishing’, found pages that promised a free download of the latest Microsoft PC software. They are asking for personal information such as email users, passwords and other data that can be used on the Internet to commit criminal activities.

In this regard, the Association of Internet, which also warned of the problem, recommends users be careful with open files, and provides a guide developed by the FBI, with cyber defense tips.

How To Root the Samsung Galaxy Ace (Gingerbread)