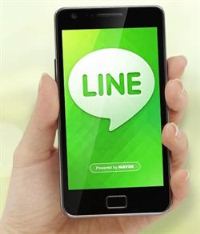 WhatsApp Alternative Line App Available For Windows and Mac: A new instant messaging service WhatsApp want to overshadow. Used by 70 million users since it launched in its home country, Japan, the Line Naver created by the company can not only send text messages, voice and video but also make free calls and even use on PC (Windows) and Mac.

New mobile applications and smartphones have gotten increasingly fewer calls are made through them. IM services have displaced SMS and calls follow the same path. The ability to type messages and make calls through these services without imposing an additional cost to the contracted data rate makes them one of the most used applications by users.

The application is available for iOS, Android, Blackberry, Windows Phone, Symbian and S40. Along with Whatsapp, Apple has launched its own service to communicate between iPhones, iMessage, even Samsung devices incorporated in their service Chaton. Another alternative to WhatsApp has been created in Spain under the name Soptbros, which claims to offer more security and privacy than its rivals.

However, it starts to emerge as an alternative to these is an application created in Japan. It also called Line and text instant messaging, voice and video can perform many more actions, which make it an essential app on smartphones.

Line takes only 17 months available for download but in Japan and has made 70 million users have already downloaded this app on their devices. It is available for iOS, Android, Windows Phone, Blackberry, Windows and Mac, since one of the features of Line is that you can use from a computer.

For use in a computer as the team gathers Line on your website, you need to register with an email address.

Another feature is the ability to make free calls. Although the ability to make calls via IP is available with services like Skype, Facetime or Blackberry Messenger (version 7), the fact is that this type Line allows free calls from the same application, so it is not necessary leave to call.

On the other hand, has a feature that also about social networks. Line incorporates a platform in which the user can write messages and exchange views, similar to Twitter. Moreover, thanks to the option Shake it!, Users can add friends just by shaking the phone, though, both should be near-or exchange user information through QR codes.

Line is launching its launch in Europe and the United States and intends to reap the same success he has achieved in Japan. Visit Official Line Website for Download