Selena Gomez, Katy Perry And Uma Thurman Lace Dress At UNICEF Gala: The city of skyscrapers lived their Tuesday a more cohesive and elegant nights of the year. Rarely a Gala so masterfully manages to combine glamor and commitment. 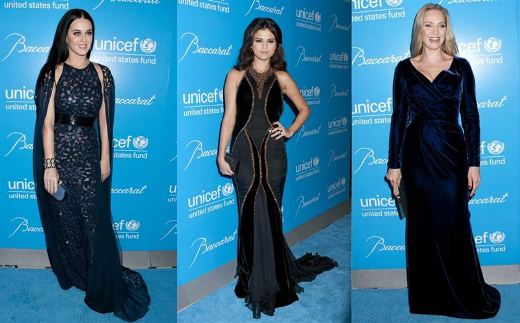 UNICEF, the United Nations Fund for Children charity ball held its traditional baptized under the name of ‘Snowflake Ball‘ in New York.

Despite being one of the most familiar faces events has met in recent weeks, three women have been able to shine above others.

The singer appeared a magnificent Californian lace dress in midnight blue semi-transparent layer of gauze with the same color and black leather belt while exestrella from Disney opted for a model of velvet and rhinestone details also played with transparencies.

Meanwhile, the star of ‘Kill Bill’, much more discreet, also chose for her tight velvet dress color ‘blue klein’ of which we highlight her generous cleavage, showing what was recovered after giving birth recently .