Samsung Presents Galaxy Camera The Full Experience of Photography: Samsung has unveiled its Galaxy Camera, a machine 21x optical zoom, 4.8-inch touchscreen, Android (with all that this implies in terms of applications), WiFi and 3G. According to the South Korean company, offers the “Full experience” of photography. 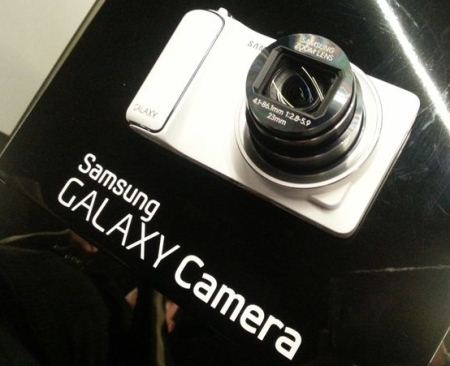 The Samsung Galaxy Camera was unveiled by Samsung at IFA Berlin in late August and instantly became a highly anticipated device.

At an event in Madrid which took place on Tuesday 20 November, Vice President of Samsung Spain, Celestine Garcia, has welcomed the imminent launch of this camera, a device that represents “two products (smartphones and cameras) that converge a new category of “Smart Cameras”. This merger responds to a “necessity” that the company had received.

“More and more devices have spoken,” said Garcia, from smartphones to ‘tablets’, not forgetting the Smart TV or media players. So the cameras could not stay out of what he described as a “virtuous circle of communication.”

The vice president of Samsung Spain has suggested that this device responds to a “consumer demand”, because “we want to be connected” and “share what is happening around us.” In addition, “people also want ease of use” and “fair share when they want.” Hence the importance of the emergence of Android and connectivity on the device.

With multiple automatic modes, an expert mode with which parameters such as aperture and shutter speed, video and photo editors, or integrated social support Android apps (Facebook, Instagram, Twitter …), Samsung believes that this device offers ” complete experience “of photography, especially for those users who feel” very comfortable taking pictures with a cell phone, but looking for better performance. “

Also remember that the device, with quad-core Android 4.1 is fully compatible with other applications of Google Play, although they have nothing to do with photography, video games or apps like VoIP, expanding so enormous possibilities. Its only shortcoming is that does not allow traditional phone calls, but it is also true that it would be uncomfortable to wear as a ‘smartphone’, a device that does not replace, but complement.

The Galaxy Camera has a 21x optical zoom, angle of 23 mm and 16-megapixel CMOS sensor. It will come with WiFi and 3G (for now there will be WiFi only model), 8GB internal memory, expandable via microSD. Another interesting detail, which often lack almost all smartphones, is to incorporate a microHDMI port for connecting to a TV easily, besides other wireless options.