Microsoft Confirms Skype And Live Messenger Coming Together: Microsoft has decided to integrate Windows Live Messenger service and Skype (Messenger will disappear and be replaced by Skype). Thus Messenger users will now be able to find and interact with your Skype contacts directly. 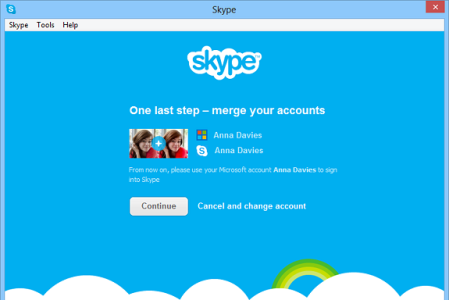 This week featured a rumor that pointed to Microsoft intended to remove Windows Live Messenger for Skype, in an attempt to focus their efforts. The truth is that both services have common characteristics and the movement seems logical. Given the large volume of Windows Messenger users change was considered significant.

After speculation, Skype has been who has confirmed that movement. “Skype and Messenger bind. Millions of Messenger users can now find contacts in Skype. Upgrading to Skype, Messenger users can immediately use instant messaging and video calling with their Messenger friends,” explained from the service VoIP.

Thanks to this innovation, Messenger users will be able to start using Skype as a center from which to communicate with your contacts, so you can harness the power of VoIP. However, this possibility involves the disappearance of Messenger as known.

“Our goal is to provide the best communication experience for everyone, anywhere. We are focusing our efforts on making things easier for our users while continuously improving the user experience. Therefore, withdraw Messenger in all countries of the world in the first quarter of 2013 (excluding mainland China where Messenger is still available), “explained from Skype, which is part of Microsoft.

This decision has been developed during the last few months. In Skype explained that already took an important step by Skype 6.0, which allowed users to log into the service with your Microsoft. With this new movement, Messenger users will be able to use your Skype account, provided they have the updated version of Skype.

“GREAT BENEFITS”: From Skype stressed that this new service organization will report “great advantages” for Messenger users. The disappearance of the service as it is known is an evolution, possibly natural.

Among the new features in Skype have highlighted the possibility of “a broader support for all kinds of devices, including ‘tablets’, and the advantage of communication opportunities with contacts Skype usual Messenger users.

“We will be working the next few months to help users with the transition to Messenger Skype offering information and go over these months. Certainly enjoy using Skype we believe and we encourage you to download the latest version, you start Log in with your Skype Microsoft and experience for yourself “, finished from Skype.

Thus, it is confirmed that Microsoft bet on Skype as their communication application. The company made significant outlays for acquisition and now beginning to see the real place that expects Skype deal in your organization.