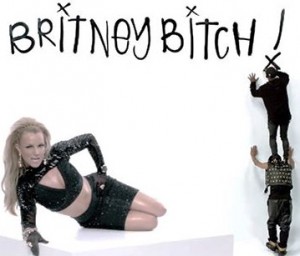 Well, that was a head to scratch, huh? The video begins with a fake English accent our dear Britney Madonna channeling while Will.i.am reminds us that the song is called “Scream & Shout” saying over and over again and in case you did not understand, his word corresponding rings really bring the message home.

It seems that the only thing more repetitive the lyrics are the multitude of product placement. Anyone else looking forward to going soon to buy a portable speaker Beats by Dre?

But more importantly: Why is not Britney dancing?! Fans were hoping that this “dance” movements would have iconic X Factor judge, and not just his clone in front of a white background for 4 minutes and 52 seconds.

All I saw was a bit of fist pumping and posing precisely positioned as a pricing model is right in front of a room, located in the showcase showdown.

Now please excuse us while we go see “I’m a Slave 4 U” for the millionth time ten.

With all that said, the pop princess is phenomenal. With her teased blonde hair, sexy pencil skirt and the highest of high heels, Ms. Spears looks sexy and sophisticated.

Some notes on a few others: “It’s Britney Bitch” never get old, Will.i.am has too stupid hats, and the video ends with a man the first Black Eyed Peas front firing a dummy network in gold. If we have no idea why he did that.