Video Red Bull Stratos Man Felix Baumgartner Space Jump Extreme Daredevil:  The Man Felix Baumgartner An Austrian made the highest and fastest jump in history Daredevil’s Supersonic skydive hit Mach 1.24, or 833.9 mph, according to preliminary data, and became the first person to reach supersonic speed without traveling in a jet or a spacecraft after hopping out of a capsule that had reached an altitude of 128,100 feet above the Earth. 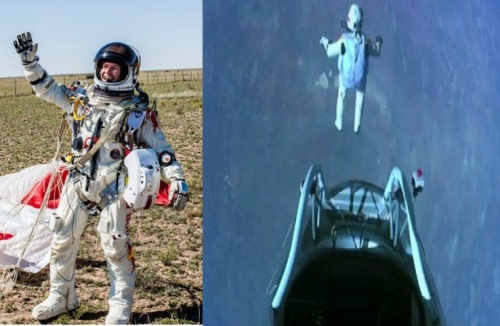 Baumgartner, whose Sunday freefall was watched around the world, was at one point traveling at 833 mph or Mach 1.24, and he shattered the speed of sound during his 4 minute 20 second freefall. He is the only human to do so without the aid of a supersonic jet or space shuttle.

“It’s like swimming without touching the water, and it’s hard because every time it turns you around you have to figure out what to do. So I was sticking my arm out then it became worse,” he said. “I had a lot of pressure in my head. But I didn’t feel like I was passing out. I was still feeling ok, I — I thought, ‘I can handle the situation.‘ And I did.”

He broke altitude and speed records set half a century ago by Joe Kittinger, now 84, a retired Air Force colonel whose reassuring voice from mission control guided Mr. Baumgartner through tense moments. Engineers considered aborting the mission when Mr. Baumgartner’s faceplate began fogging during the ascent, but he insisted on proceeding and made plans for doing the jump blind.

“It was harder than I expected,” said Mr. Baumgartner, a 43-year-old former Austrian paratrooper. “Trust me, when you stand up there on top of the world, you become so humble. It’s not about breaking records any more. It’s not about getting scientific data. It’s all about coming home.”

Engineers forecast that Mr. Baumgartner would reach a supersonic speed of 720 miles an hour by jumping from 120,000 feet, the altitude that they had promised to reach. But all along they had hoped the balloon would go even higher — and lead to an even faster fall, which did occur. As a result, even though he fell farther than Mr. Kittinger did, his fall took less time: 4 minutes and 20 seconds, which was 16 seconds less than Mr. Kittinger’s.

Mr. Baumgartner jumped from an altitude of 128,100 feet and landed in desert about 4,000 above sea level, so the jump from capsule to the ground covered about 23 and a half miles.

When Mr. Baumgartner lost control of his body during the early part of the jump, he feared going into a flat spin that would send blood away from the center of his body.

“At a certain R.P.M.,” he said afterward, “there’s only one way for blood to leave your body, and that’s through your eyeballs. That means you’re dead. That was what we feared most.”

Because of the limited sensation inside his pressurized suit, he said recovering from a spin was much more difficult than during an ordinary dive.

“As a sky-diver, you can feel the air on your right shoulder and you immediately know what to do,” he said. “Here you don’t feel the air, so you have to wait until the air pushes you around. Then you think, ‘Oh, it pushed me around clockwise — that means I have to do this.’ ”

Brian Utley of the FAI, the international federation that certifies aerospace records, calculated the height and speed of the jump by independently analyzing data gathered on microchips in Mr. Baumgartner’s suit. After a thorough analysis of the data is made over the next several weeks, Mr. Utley said, the precise official figures might be slightly different, but he had no doubt that Mr. Baumgartner had set a supersonic speed record.

“Sometimes we have to get really high to see how small we are,” an exuberant Baumgartner told reporters outside mission control after the jump.

Baumgartner’s descent lasted just over nine minutes, about half of it in a free fall of 119,846 feet, according to Brian Utley, a jump observer from the FAI, an international group that works to determine and maintain the integrity of aviation records. He said the speed calculations were preliminary figures.

During the first part of Baumgartner’s free fall, anxious onlookers at the command center held their breath as he appeared to spin uncontrollably.

“When I was spinning first 10, 20 seconds, I never thought I was going to lose my life but I was disappointed because I’m going to lose my record. I put seven years of my life into this,” he said.

He added: “In that situation, when you spin around, it’s like hell and you don’t know if you can get out of that spin or not. Of course it was terrifying. I was fighting all the way down because I knew that there must be a moment where I can handle it.”

Baumgartner said traveling faster than sound is “hard to describe because you don’t feel it.” The pressurized suit prevented him from feeling the rushing air or even the loud noise he made when breaking the sound barrier.