Tom Ford And Richard Buckley Love Story Forever. We all know Tom Ford was a shy 25-year-old when he met magazine editor Richard Buckley. It took him the length of an elevator ride to decide he wanted to marry him. 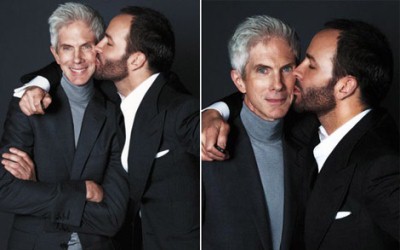 RICHARD BUCKELY, WRITER After three and a half years in Paris, I moved back to New York to be the editor of a new Fairchild magazine called Scene. On my fourth day back in town, I attended the show of a young designer called David Cameron. As I was waiting for the show to begin (it was held in a loft), I noticed a guy standing in the crowd off to the side and thought, Cute. Definitely cute. When the show was over, I sat in my seat, fiddling with my pens and my notebook, until I saw his camel coat out of the corner of my eye. I hopped up and started to walk out with him. Like I said, we were in a loft, and the quickest way out was by the stairs. As we walked, I would look over at him from time to time and smile. He’d give me a weak smile back. This went on until we hit the street, when I swear he sprinted away from me.

Fast-forward 10 days, and I am up on the roof of the Fairchild building on 12th Street doing a hideous shoot for WWD when Owen, the art director, asked if I had a boyfriend.

“Are you seeing anyone?”

“No. I haven’t even been out since I’ve been back.”

“I’ve been away for three and a half years, I have two jobs, and I’ve got to get back into the work rhythm of New York. I don’t want any distractions.”

“Hasn’t there been someone you’ve thought of asking out?”‘

At that point, I told him about this guy I’d seen at David Cameron’s fashion show and how he’d disappeared. Literally two minutes later, Harry, from the photo lab, came up on the roof and said, “There’s some guy here from Cathy Hardwick to pick up clothes.” It was then that the guy from the fashion show stepped onto the roof. I turned to Owen and said, “That’s him.”

I went over and told the young man I could give him all the clothes except for the dress we were going to photograph, most likely, for a cover. I took him down in the elevator to the WWD floor. The whole time down in the elevator I was babbling on like a schoolgirl. It is at this point, when telling this story, that I like to put my hands up to my head and wiggle my fingers like eyelashes. I was shamelessly flirting with this boy. He, meanwhile, said nothing, and the quieter he was, the sillier I became. As I was bagging the clothes up in the fashion closet, I told him, “Tomorrow night, Cathy is giving me a ‘welcome back to New York’ dinner at her apartment.” I was hoping he’d mention it to her, and Cathy, who is no dummy in the gay department, would invite him to the dinner.

The next night, the dinner was wonderful, but the young man wasn’t there. After dinner I took Cathy aside and asked, ‘Who is your assistant?’

“His real name is Tom, but I call him Tender.” At the time, Cathy was married to a man called Tom Snowden. She said she had to distinguish between her two Tom turkeys, so one was Tough (her husband) and the other (Ford) was Tender.

Like I said, there was never any moss growing on Cathy, and she immediately said, “He’s perfect for you. Come for lunch on Monday. I’ll arrange the whole thing.”

Apparently, when she came in the next morning, Cathy yelled, “Tender, get in here!” She told him, “Richard Buckley, the fashion editor of Women’s Wear Daily and editor of Scene, wants to go out with you. He’s very important. We need him. You take my credit card and go anywhere he wants to go.”

On Monday, it was pouring rain, and I arrived at the Cathy Hardwick offices thinking we would be going out to a restaurant. No. We had tomato soup and bologna sandwiches in her office. Halfway through lunch, Tom got up and said he needed to get back to work. At this point I’m thinking, I’m 38 and he’s 25. He’s not into geezers. Three strikes, you’re out.

I had been back in my office about 10 minutes when the phone rang.

“This is Tom Ford from Cathy Hardwick. I was calling to see if I could ask you out for a drink or dinner some evening.”

I was totally thrown off guard, because I was starting to think he was a stuck-up little prick, so I said, “Well, tonight and tomorrow night I have business dinners. Wednesday evening I leave for the country and Thanksgiving weekend. What about a week from Wednesday?” He said that was fine. Then we stayed on the phone for a few minutes and he actually started talking to me, and I thought, He’s not stuck-up at all. Finally I said, “Look, the dinner tomorrow night is tentative. If it is canceled, can I call you at the last minute?” He said, “Sure.”

Well, that was an adrenaline-charged 24 hours for me, because I had no business dinners, no Thanksgiving in the country. Nothing. Nada. At 4:23 Tuesday afternoon I called him, said dinner had fallen through, and asked if he was still free.

For our first date, we went to this really sleazy cheapo restaurant on the Upper East Side called Albuquerque Eats’I don’t think it exists anymore. Tom sat there chit-chatting: ‘And in 10 years I’m going to be showing my own collection in Paris, and I’m going to be a millionaire, and I’m going to do this, and I’m going to do that.’ And I kept thinking, This guy is really na’ve. But as we talked about other things, it was almost like seeing down a rabbit hole. I felt like I was looking at his eyes, and it was just spinning around and taking me down inside him. I could see he was a good man with a big heart. It wasn’t a physical thing as much as it was a psychic wave.

I’d been through a lot of relationships and was very suspicious of a lot of things, but with Tom I was careful not to repeat the mistakes I’d made with other guys. I’d been burned many times and had learned to keep people at arms’ length. And on New Year’s Eve 1986, we didn’t go out. We stayed at my little apartment on Saint Mark’s Place. I gave him a little Tiffany box, and inside was a key to my apartment. He moved in the next day.

Tom’s the perfect modern gentleman. We’re both old-fashioned that way. We both stand for ladies at the table and open doors for people. If you have good manners, people notice. And they appreciate it. You’re showing respect for them. When I got throat cancer in ’89, there were people who Tom cut out of our lives because of the way they responded. My best friend and one of my mentors had died — one in ’87 or ’88 and one later that year — both from AIDS, and there were a lot of people who just assumed that I had AIDS, and there were some people who wouldn’t come visit me because they were sure they would catch it. And Tom just cut them out — wouldn’t even speak to them if he ran into them on the street.

I couldn’t imagine being without Tom now. I couldn’t imagine what I’d be like if something happened to him. There’s only one Tom for me. He is still that man who I met 24 years ago, who has a good heart. via Out