This is a step that confirms that it is increasingly about the arrival of the system, which is expected in early 2013. 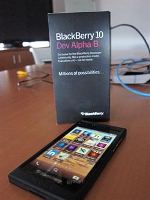 BlackBerry 10 is one of the last chances of Research in Motion to get regain their status and become competitive again. The company has placed its hopes in the system and is working to make it interesting for users and developers.

Following the marked development channels, RIM has confirmed that it is accepting applications for its new operating system. “We guarantee that from October 10, applications are sent to the store will be reviewed, evaluated and will be ready for marketing when it’s released the BlackBerry platform 10 (during the first quarter of 2013),” explained from RIM.

The goal is to have the maximum number of applications to make the system even more attractive. The company has advised users to submit their applications as soon as possible.

“The sooner you send the application to the app store, before you can be evaluated within the Built for BlackBerry program (Developed for BlackBerry). Following this analysis, if the application is considered suitable, the developer can benefit from the advantages of ’10k Developer Commitment ($ 10,000 for developers) “, explained.

To further encourage the sending of applications for the system, the company explained that the applications are sent to BlackBerry App World for the months of October and November, will be given a privileged place in the store during the launch of the operating system BlackBerry 10.