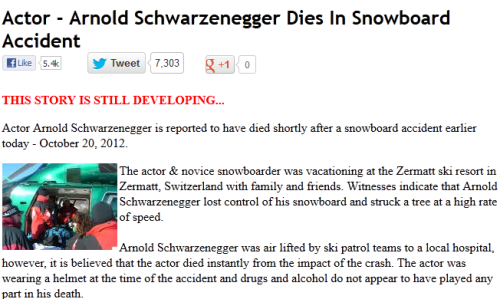 Actor Arnold Schwarzenegger is reported to have died shortly after a snowboard accident earlier today – October 20, 2012. The actor & novice snowboarder was vacationing at the Zermatt ski resort in Zermatt, Switzerland with family and friends. Witnesses indicate that Arnold Schwarzenegger lost control of his snowboard and struck a tree at a high rate of speed.

Arnold Schwarzenegger was air lifted by ski patrol teams to a local hospital, however, it is believed that the actor died instantly from the impact of the crash. The actor was wearing a helmet at the time of the accident and drugs and alcohol do not appear to have played any part in his death.

The story is same: Someone sees this article and without giving a second thought about its authenticity he tweets a R.I.P. message (although the footnote on this very web page says that the article is FAKE!). Someone else re-tweets and then in a couple of hours it becomes viral. Do not worry, He will be back. A week ago, Johnny Depp was dead(!) and last month Morgan Freeman’s death was announced in Facebook.

Arnold Schwarzenegger was great in Expendables 2 ( I am Back).