Apple Closed Online Store For Possible iPad Mini Arrival: Apple has once again closed online store waiting to update its catalog after his last performance. The company has invited the media for this October 23 in what is expected to be the launch of a new ‘tablet’, which is already known as iPad Mini. 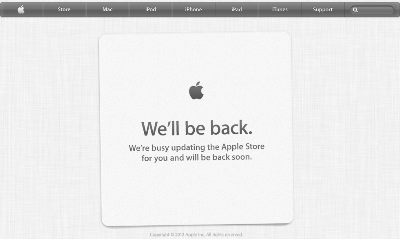 The tech research firm said global sales of tablets with displays in the 7-inch range should soar by 100 percent this year to 34 million units, up from 17 million in 2011. Sales will nearly double again in 2013, rising 96 percent to 67 million, the firm said.

Apple is a company true to its traditions. The company has managed to make their presentations real world events that have a strict planning which carried out a series of steps as usual. This is a legacy of Steve Jobs, which fostered an aesthetic presentation and structure of the company.

One of the first steps in Apple presentations occur “Outside” of the enclosure. This is the disconnection of the company’s online store. Apple cuts the traffic to your store several hours before one of his presentations. The cut is common and usually indicates the renewal of the company’s products.

How could it be otherwise, this time Apple has also closed its store. Currently the classic message that explains that the company is updating its store catalog chairs the website. In this way, users will have to wait to buy Apple products through the company website.

So within hours not know the news from Apple, but it seems that a new ‘iPad Mini’ will star in the presentation. An iPad Mini with 7.85 screen and a lower price than the current model, aimed to compete directly with the Nexus 7 and the Amazon Kindle Fire.

Invitations to the first major product launch since the death of Apple’s visionary co-founder Steve Jobs last year bore only time and location details along with the message: “We’ve got a little more to show you.“