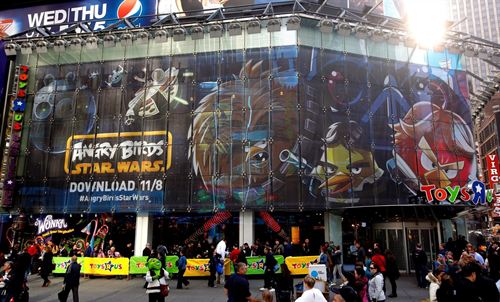 The scenario chosen to debut the new game was a site to rise to the occasion: the Times Square in New York. The Finnish company dressed the facade of the enormous store of Toy’s R Us (which has inside a Ferris wheel and a reproduction robotic Tyrannosaurus rex Jurassic Park) with its friendly birds.

The company still has published a video with the ‘gameplay’ of their game, so it is not 100% clear integration of mechanics of the series with the atmosphere of the film by George Lucas. Yes has shown some posters and even merchandising advance what lies ahead.
The perfect fusion of the two universes

Thanks to the ‘set’ of figures we know that there will be levels in normal gravity, in which pigs, galactic soldiers disguised or even Darth Vader, will hide between slats shaped AT & T. In fact, it seems that all levels will be inspired by popular film sequences, like the Palace of Jabba the Hut.

Furthermore, in all these games have seen, as the first promotional image progressed, the birds will be disguised as Han Solo, Lucke Skywalker, Princess Leia and Chewbacca. In addition, its popular slingshot slingshot will become a light, like the lightsabers of the Jedi.

We also have seen many illustrations of a Death Star-shaped pork, so it is not unreasonable to think that Rovio mix the ordinary course of the series with the Angry Birds Space, the final delivery and weightless.

Furthermore, Rovio has built a kind of survey that tops his Tumblr dedicated to Angry Birds. The company asks the fans of the game on which side: How the rebels or the empire?

In this sense, Rovio has also released the first images of the emblems of the rebel alliance of the birds and the evil Galactic Empire pig, following the line of the original designs of Lucas Films.

Angry Birds Star Wars will be released for iOS and Android mobile devices, Windows PC and Mac on November 8.