Android Ice Cream Sandwich Still Eating Gingerbread: Ice Cream Sandwich (ICS) continues to grow unabated between terminals Android. Version 4.0 is present in 23.7 percent of devices using Google’s mobile operating system. Meanwhile, Gingerbread (2.3) is still the most used operating system, with 55.8 percent of the total quota, although their presence has decreased. The presence of Jelly Bean, for now, is residual. 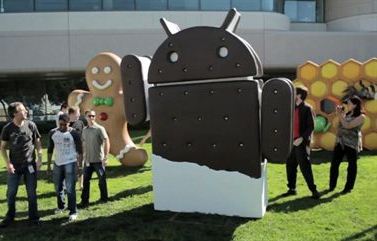 Despite the fragmentation of Android, which has several versions of its OS, and the recent release of version 4.1 Jelly Bean, it seems that the atomization begins to subside. Gingerbread is present in most of the devices and the latest version available for most developers continues to grow between the terminals with Google’s operating system.

Android has released statistics using its mobile operating system on your website developer, Android Developers. The study took place during the last 14 days of September, and among the most important results, we found that ICS has gained 6.8 points compared to July results, when it registered 15.9 percent.

The most popular version of Android is already present in 23.7 percent of the devices, although the data were taken into account only versions 4.0.3 and 4.0.4, unlike previous months, which also included the percentage versions from 4.0.0 to 4.0.2.

Meanwhile, the latest version of the Android operating system, 4.1 Jelly Bean, who began arriving in the ‘smartphones’ and ‘tablets’ in mid-July, still recorded a weak presence in the Android graphic. Jelly Bean is already present in 1.8 percent of the devices, and has increased 1 percent compared to July data.

Android version 2.2 also continues its descent. While Froyo July recorded a percentage of 15.5 per cent during the last weeks of September, the percentage dropped to 12.9 percent.

Google continues a slow but steady progress towards unifying their operating system. The penetration rate of the latest versions of Android still low compared with that of previous versions like Gingerbread, although these will inevitably lose strength.