Angel of Victoria’s Secret Alessandra Ambrosio And Her Bra Nearly Two Million Euros: This year we have had two mothers in its ranks, Adriana Lima and Alessandra Ambrosio, and surely must have been a difficult decision between these two beauties. 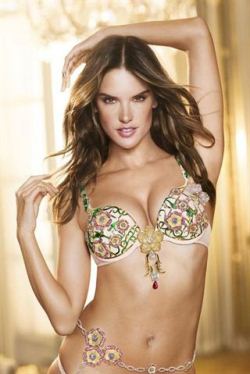 If last year was Miranda Kerr the star of the parade, wearing the ‘crown jewel’ and reappearing on the catwalk after being withdrawn because of motherhood, this time it gives the baton to Alessandra Ambrosio, who will show off the most expensive piece in the collection.

Still, do not panic, Adriana Lima sure to also have prepared something special since it also reappears in the most provocative show of the season.

However, although both return to the runway, Alessandra Ambrosio is the undisputed star of the show and it has taken People, who wanted to interview this Angel of Victoria’s Secret, which freaked when told he was to be the bearer of exclusive piece from the collection.

The Brazilian has reported that its important role when no more than three months had given birth to her little Noah Phoenix, specifically learned the news in late May and it was a lot of pressure for her.

Alessandra says she was breastfeeding her baby when she found her next role for Victoria’s Secret: “I just wanted to scream,” he said, “but I will not lie, I was really worried. Was full mother mode”.

Moreover, he had so recently given birth who had to get permission from your doctor to start getting in shape to show off her hot body for the show.

That when his doctor gave him the green light started practicing yoga and walking for the first two months, and then we got serious about spinning and pilates classes, in addition to controlling your diet.

All this to look perfect the Fantasy Bra, a bra that will be the most admired part of the show. This piece nude color with embroidered flowers and combined with a belt clip and a fine of 5,200 pieces of precious stones.

Yes, the lovely Alessandra Ambrosio could not help but share this happy news with his Twitter followers: “It is an honor to wear the Fantasy Bra at the Victoria’s Secret Fashion Show this year! I can not wait for you to see the parade “wrote the model.

And so, looking with this luxurious sensuality special bra $ 2.5 million, nearly two million euros, Alessandra Ambrosio takes the legacy of Miranda Kerr, the star of the show last year. What will showcase Brazil’s wings? We have to wait almost a month still to descrubrirlo.

Robert Pattinson: The New Face for House of Dior