Princess Kate Middleton Top List Best Dressed on Vanity Fair’s international best-dressed list:  In the end it seems that almost 50,000 euros that Kate Middleton  the wife of Prince William of England is spent on clothing per year were worth it. Always standing out as style icon, the Duchess of Kate Middleton has a new title to her trophy collection in the world of fashion. 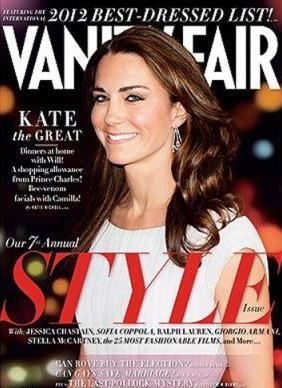 And Kate Middleton has been named the number one best-dressed list by Vanity Fair. This is the third consecutive time that the princess gets this prestigious title from the hands of British designers like Alexander McQueen, Alice Temperley and Matthew Williamson, among others.

One of the main keys to her style that has managed to take it to the top has been its ability to match garments with other low cost exclusive making your unique style.

Catalina also appears alongside the name of her brother, Prince Henry, who is here for the first time. Another figure of royalty in the proposals of Vanity Fair is Charlotte Casiraghi.

Leaving the world of royalty aside, hollwywood stars the likes of Jessica Chastain, Diane Kruger and Colin Firth have their place in this particular ranking. Meanwhile, Jay-Z and Alicia Keys are in charge of representing the world of music while Tom Brady is done with the sport.