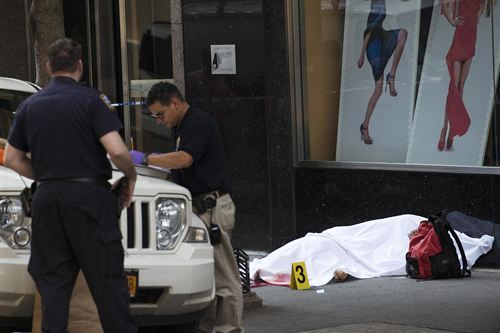 A fashion accessory designer of 53 years who was upset because he had been fired a year ago, killed a former co-worker of 41 years shooting him three times with a .45 on a sidewalk, authorities said.

The assailant was killed when two police officers, who had attacked, he returned fire. New York Mayor Michael Bloomberg said in a press conference that will probably survive the wounded and some of them were shot by police. They are all adults, two women and the rest are men.

The New York police chief Raymond Kelly has identified the attacker as Jeffrey Johnson, the district of Manhattan. According to Kelly, Johnson was employed by Hazan Imports, which has its offices opposite the famous skyscraper. Bloomberg has made it clear that this crime does not seem to have any connection with terrorism.

Security forces cordoned off the area and closed several streets. James Bolden, a postman for 31 years, has been told that he saw a man “lying” on the ground, “bleeding from the neck.” “Everyone was around recording videos and taking pictures, and the security guys shouted that departed and leave him space. Barely breathing,” he recounted.

It is the third major shooting occurred this summer in the U.S., after a young man went into a cinema in Aurora (Colorado) and killed twelve people on 20 July and a man that ended the life of six people in a Sikh temple outside Milwaukee (Wisconsin) on August 5.

Bloomberg, who is in favor of imposing tighter controls on the sale and use of firearms and founded the Mayors Against Illegal Guns, said: “We are not immune to the national problem of gun violence “.

It is the second shootout in midtown Manhattan in the last two weeks. On August 12, a police officer shot and killed a man wielding a knife in Times Square on a Saturday afternoon. Bloomberg is often noted that New York is the safest big city in America, for its low crime rate.