Roger Federer Won His Seventh Wimbledon and Regain World Title: Roger Federer has set for the seventh time in his career at Wimbledon, the third Grand Slam of the season, after winning the final against Andy Murray (4-6, 7-5, 6-3 , 6-4), so that equates to Pete Sampras and placed back in front of the ATP world rankings. 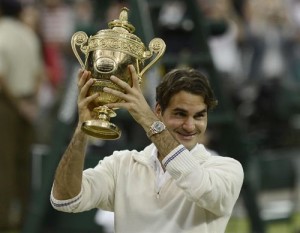 The setting was idyllic for Federer would equal Sampras’s seven titles, but Murray was not willing to put it all easy to Switzerland and gave a lot of trouble. The Scots wanted to give a good image of the British Empire after 74 years without contest a Wimbledon final and did not disappoint.

Federer began the meeting with questions. Federer did not quite find his best tennis and Murray took advantage to dominate the game and press the Swiss service. At the first opportunity, the Scot got a break that made him get an advantage, but Murray was not able to maintain the income and yielded a break in the fourth game.

Murray was playing his first final at ‘home’ and, although it started with a solid tennis, seemed nervous. However, the experience helped him overcome the bad times and the bad start of Federer won to clinch the first set. The Scot looked like he was losing strength as the set progressed, but was the surprise in the ninth game of the part and got a ‘break’ with which close the set with a 6-4.

The Swiss realized that Murray would not be a spectator in his victory and changed its strategy in the second set. The still world number three was much more aggressive, tried to move to Scotland at all times and tried to go to the net more often. Gradually, Federer was being felt in the match, but still making the same mistakes of the first set.

Murray was in the same vein of the first games, pushed Federer’s serve and went on to have two break points’ in the fifth game. The Swiss, on this occasion, was not overcome by the Scottish and moved to 3-2 in favor. Since then, Federer focused on winning his serve and wait for the right time to rest, which eventually reached in the twelfth game, when he got close the quarter with a 7-5.

They were the worst moments of Scottish and British seems to want to take a rain cape. The water would be the protagonist of the final and the organization had to stop for an hour to end the retractable roof of center court tapase All England Tennis Club.