CCM Trainee Behavior Reveals T-ara Jiyeon Bullying : The controversy surrounding the scandalous development bully’s T-ara member to Hwayoung heats up, the evidence of the development’s internal bully of T-ara continue meruak. More recently, a netizen claimed that she was one of the trainees in Core Contents Media and reveal the behavior of the bully’s development of Jiyeon.

An anonymous writer began, “I am a second year trainee who is under the same agency with T-ara. GM Core Contents Media = Media = Mnet Media. I decided to write this because of a sense of frustration about the incidence of T-ara recently. I’ll stop being a trainee, and disappeared. ”

She continued, “Hwayoung debut on December 3, 2010 and I became a trainee on 18 April 2010. If you come here, you mess up life. During the holiday T-ara, they came to our rehearsal space. Hyomin collect all the trainees and will debut the group and asked us to introduce ourselves. I remember that day clearly. Someone said that Kang Ho Yeol Hyul (ex-member Co-Ed School) and Jiyeon courtship. Jiyeon then yelled, “How old are you?” “Where do you live?” ‘Do you smoke? “” You have ID? “I told her I was, where I live, and that I was not drinking and smoking. T-ara member then said, ‘What ~ Daebak.‘ ” 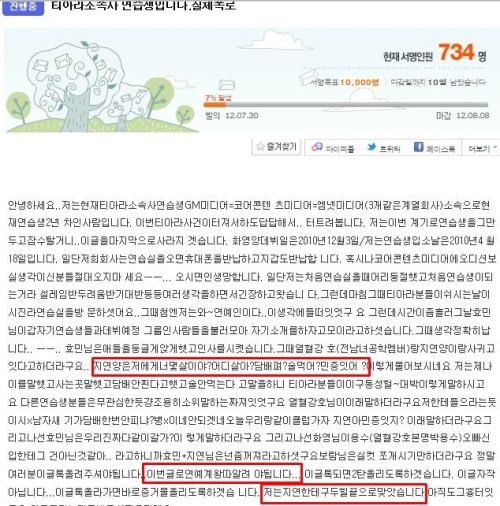 Then, “Kang Ho Yeol Hyul shouting loudly as he wants me to hear, ‘Pel ** ur never smoked? Idiots, let’s take her to the club tonight. ‘… We must expose all cases of bully’s development is going on among celebrities. Jiyeon hit me with her heels. I still have a scar. ”