Kaitlyn Leeb showed off her sexy, and slightly disturbing costume, at Comic-Con earlier this month.

“There were a bunch of people at Comic Con asking if I had surgery for the third one…. Others thought that the two on the side were real. I guess that’s the one thing that bothers me the most is that they think I’m out there prancing around Comic Con with my breasts out. They really are not mine. I’m more covered than I am at a day-to-day basis.”

According to the Ottawa Citizen, it takes the 24-year-old actress about 4-hours to get fitted with her three boob costume. It may be a lot of work but the actress says that it’s worth it. Leeb has a handful of movies under belt but “Total Recall” (and all three of her breasts) is making her a star.

“Every day is new. It’s just really crazy and exciting at the same time. My Twitter following has gone up. It’s crazy, but really cool.”

Visit this post to see the photo of Kaityln Leeb as the “Seductive Woman” (AKA the three breast hooker) from Total Recall.

And just for comparison’s sake. Below the photo of Kaitlyn Leeb sporting the classic two boob look. Photo + Post Credit via Inquisiter 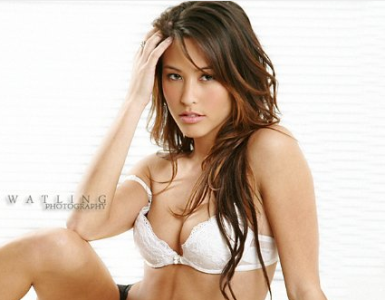