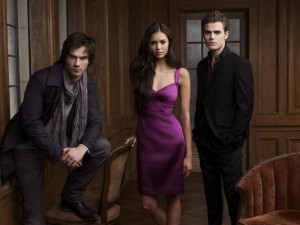 ‘Vampire Diaries’ series is the most successful American chain so no wonder it has been renewed by their managers to begin its fourth season. From September, viewers will see how the series turns to focus on the plots of Elena (Nina Dobrev) in his senior year, as recorded by E Online.

Moreover, the heir to ‘live feeling’, has renewed and will reach its fifth season. Young handsome, rich and problematic Beverly Hills will continue on U.S. screens though, as in the original, many have passed the age of the Institute and to come repeating some courses.

90210 started on the same stage of its predecessor, at the Institute of Brenda, Brandon, Kelly, Steve and Dylan, but with new students. Of course, using the pull of the legendary series of 90 some of their players decided to return.

That was the case with Shannen Doherty and Jennie Garth who were in the first season but then gradually reduced his appearances.

SUPERNATURAL, EIGHTH SEASON: Another that keeps rising is ‘Supernatural’ getting behind this renewal the not inconsiderable figure of eight seasons on the screen. The series, which focuses the story of two brothers who try to solve supernatural mysteries, mix in the next season with more black humor, as acknowledged by the publication.

Part of the success of this fiction lies in the chemistry between the two main characters, played by Jared Padalecki and Jensen Ackles. In fact, Ackles is already dragging masses of young people since it appeared in a season of ‘Smallville’ playing the attractive new boyfriend of Lana after his return from Paris.