Donald Driver Won Dancing With The Stars Crown: LOS ANGELES Football Star Donald Driver took home the mirror ball on the finale of ‘Dancing With the Stars‘ Season 14 Trophy. His freestyle and incredible speed gave him the edge and he was glowing when Zap2it spoke to him in the ballroom right after his win. 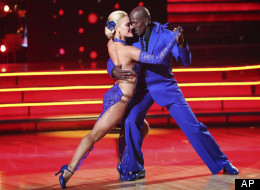 He already has a Super Bowl ring, and now football star Donald Driver can add the “Dancing With the Stars” mirrorball trophy to his awards collection.

Driver has won the Super Bowl and we asked him how this compares. “I think it’s the same. You have great moments, it took me 13 years to win the Super Bowl, I’m just glad it’s the one season to win a mirror ball.”

The Green Bay Packers receiver won the ABC dance show Tuesday after wowing audiences and judges with his kickin’ country-themed freestyle routine. He and partner Peta Murgatroyd hoisted the glittery prize above their heads after being named the new “Dancing” champs.

Streamers and confetti rained down from the ceiling, filling the ballroom as they celebrated. Driver’s wife and children joined him on the dance floor.

With just one point separating the three finalists, it was up to the viewers to pick the winner.

He and his fellow finalists, Welsh singer Katherine Jenkins and Cuban actor William Levy, each earned perfect scores for their last performances Tuesday. Jenkins came into the final contest with a perfect 60 points; Driver and Levy each had 59.

Knight did double performance duty, also singing “The Way We Were.” Kelly Clarkson also performed on the show.

The next round of “Dancing With the Stars” will feature contestants from past seasons. via Huff Post