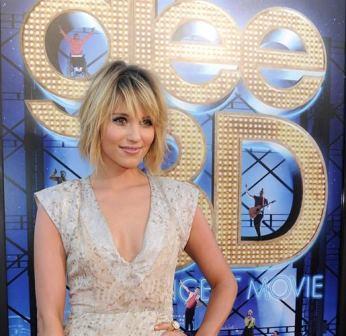 Glee: Dianna Agron in Chapter Memory: Glee and Cory Monteith ‘s tribute is a topic that seems to bring tail. The actress, Dianna Agron , who has given life to the Mckinley Institute student , Quinn Fabray , would stay out of Chapter homage.

Something strange if we remember that Quinn was a girlfriend of Finn Hudson , played by Cory Monteith , during the first seasons .

Due to problems and disagreements between the producer and the actress, since it seems that there are people in the cast and the own production to which the actress did not like him.

To make matters worse , other actors who are not in contract for this season did have a special place in this chapter .

“It’s amazing , because even though she is not contracted for this season, many other actors again pay tribute to Cory … Even those with nearly a no connection with the story of Finn much less than that Dianna had” , said one source close to the production.

“Remember it was the girlfriend in the series of Finn (Cory Monteith ) , an important part of history,” the same source added .

However, the same source goes further and accuses both Lea Michelle , as the writer and creator of the series, Ryan Murphy of ” separate it and marginalize it as much as possible ” and that the actress was not to his liking, something quite amazing .

And little was known about this bad atmosphere that existed between some actors . They have always been a sign of friendship and unity , and Dianna Agron has been less and felt the loss of Cory Monteith as one more. Besides having become the bride of Cory in the series made ​​them both they had a fairly direct .

The tribute to Cory Monteith Episode will air this coming Thursday and will be titled “The Quarterback ” and not have one of the characters in the original cast of the series.