Sony Internet 3D TV Young Designers 2013: Sony recently held a grand event to showcase the latest TV technology with which they integrate into. 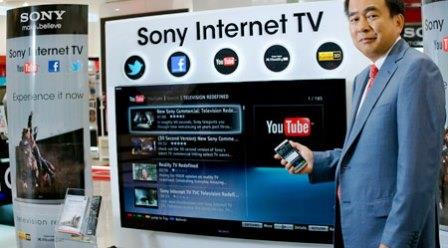 These are the Internet TV in 2013 with the size ranging from 32 to 70 with 8 lines and 13 different units. In addition to design style more youthful and sophisticated then you can note the following technologies that Sony offers 4K Ultra HD, NFC, Miracast, passive 3D, Triluminos, USB 3G, 4K player.

All new TVs will be sold at Sony Vietnam market in a month or two ago.

This year Sony is the first company to bring 4K TV resolution is more common sizes 55 and 65 to Vietnam. Here are two that Sony 4K TV at CES 2013 show. And the 84 Sony 4K was sold last year.

Sony representative said the 55 and 65, 4K will be on sale in July about this for a very competitive and reasonable. Italy is not too stress as a 84, 4K for nearly $ 1 billion.

4K Ultra HD is the name that Sony calls the TV resolution of them. 4K is a trend of high-end TVs now and the near future it will replace the popular resolution is a Full-HD today. It is said that 4K will come quickly and go to market as Full-HD rather lackluster as 3D technology.

Sony is not the only vendor 4K TV that they make the camera 4K, 4K TV channels as well as movie rentals 4K or otherwise make devices 4K content. In Vietnam the 4K movie would definitely easier than sharing a quick and simple movie.

One of the other reasons that we may have resources that 4K is the smartphone with Qualcomm Snapdragon processor 800 is expected to launch in the second half of the year or early next year and will be capable of shooting 4K.

Of course FullHD movies can now be viewed on the TV and pull up 4K 4K resolution with quality that Sony says is about 90% true 4K quality. This should be more controlled.

All the TVs that Sony offers today are Miracast and control features are integrated NFC chip. We can easily connect the smartphone to a TV with this Miracast easily and from that content on the phone can be displayed on TV.

For this reason, large diameter, heavy and often in a state of the battery every time to watch 3D movies have to go charging should not watch anymore. While passive 3D glasses do not need batteries thinner, lighter, more fashion and have both 2 features showing different content when two people wearing 2 different glasses when playing the game.

This is the image reconstruction technology of Sony. If the screen shows Triluminos technology we have images with greater color saturation, wider dynamic range and image results are more brilliant and beautiful.

Several of Sony engineer here said this is proprietary technology of Sony and at least 1 year more then the others do not have this same technology.

Sony Internet TV 2013 is integrated speaker technology they call liquid magnet for better sound quality but TV helps retain absolute thinness. Sony representatives were very confident when talking about the new sound on the TV they claim that the bass quality from the TV speakers is very good and honest through pipes up to 1.2 meters speakers.

In addition Sony also has advanced technology and Voice Zoom dialogue or on-screen presentation 7-band EQ technology will adjust the high-frequency, low and medium for optimal sound in each context program is on track.

In the event that Sony also performed on TV 3G USB attached to the network. A good idea. Just plug in and use should not set anything at all very friendly. I do not think I will use a 3G USB to TV but how far you are in the area or you are not pulling the network will find this section useful.

Looking at this year’s Sony TVs have softer, more youthful and more refined. The legs can be easily rotated to the rear and into the TV mount on the wall, very pragmatic. Even low-and middle-TV the TV’s edges are thinned significantly and equally thin rim TVs from Samsung or LG. Sony this year emphasize the design philosophy of Sense of Quartz style after the success of Monolithic last year.

TV Sense of Quartz featuring the master machine black monolith is located on a silver base with round or oblong design soft.

Additionally, Sony Internet TV in 2013 there was a small box in the front, where the integrated central processor chip and serves to connect the TV to other equipment.