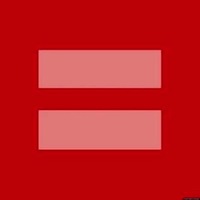 “By harnessing the passion that supporters of equal freedom loving husbands and engaged to be married, the Internet is awash in a sea of red – the color of love,” said Khoo.

The symbol caught on quickly and has been spottedon remarkable pages of many of Facebook. According to the Human Rights Committee, “said U.S. Sen. Jon Tester, D-Mont., Your support for marriage equality for the first time, to change their Facebook profile picture to red equals sign and HRC many other public officials have followed suit. “

As part of HRC’s robust social media efforts around the two cases before the Supreme Court, the red logo launched on the HRC Facebook page at 1:00pm ET Monday and the original image has been shared more than 100,000 times and created upwards of 10 million impressions in all 50 states – not including countless user-created versions. 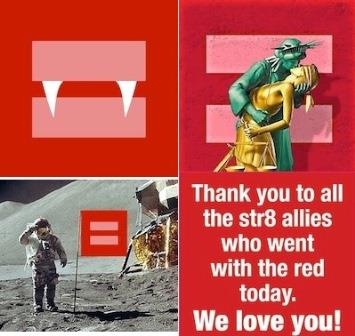 Mashable notes that the move to adopt the HRC profile picture gained notable support after actor George Takei updated his own with the logo. LGBTQ@Facebook, the social network’s official resource page, also changed its picture to the HRC’s, and shared a story about the advocacy group’s push.

Interestingly, the HRC had previously opposed the idea of bringing Proposition 8 before the Supreme Court. In a 2009 document co-signed by the HRC, American Civil Liberties Union, Gay and Lesbian Alliance Against Defamation and the Equality Federation, among other organizations, the groups argued that “the ballot box and not the courts should be the next step on marriage in California.“