Azarenka not performed her best game but it was constant and knew how to wait her time to attack the Chinese game. Li Na suffered some setbacks in her ankle and neck in the second set, difficulties prevented her take the helm of the game and the Belarusian took advantage to dominate and win the second Grand Slam of her career. 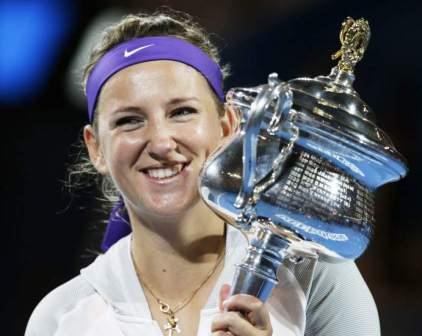 It was a tough game between two players who showed they deserved more than the title. Azarenka defended the success of last year at Melbourne Park, while Li Na wanted to lift her second Grand Slam in a track that were defeated in the end of 2011. The win could fall to either side and was eventually global number one which won the second ‘big’ in her career.

Li Na was very consistent throughout the match, despite the setbacks she suffered in the second set. The Asian twisted her left ankle midway through the second part and suffered to keep pace with Azarenka and at the beginning of the third, a further fall caused her a blow on the neck that required medical attention.

The game started for the Chinese face. Li was very solid with her game, especially in rallies, suffering too much when it came out. It was hard to take advantage of the 76% of first serves and only done with 46% of the points played on her first serve. So, yielded three ‘breaks’, although its solvency in the rest helped him win the first set (6-4).

In the second set, the Asian continued to play at the same level, but Azarenka increased its stake to finish tying the match (6-3). The left ankle sprain in the Chinese contrapié helped him to gain control of the rallies and reducing unforced errors with respect to the first set he facilitated the work.

With the game tied, it was time for the Belarusian demonstrate its ranking number and took control of the match. It was a ‘break’ in the first change I was not able to confirm, but in the third game, the Asian again suffer a mishap. Again after a contra-pie, Li had on the floor, with the necessary momentum to hit her head and suffered neck injuries.

The doctors returned to make an appearance in the Rod Laver while Azarenka heated to keep the pace. The game resumed, but the Asian was not the same. Thus, the Belarusian was done with ease with a new fracture (4-2) and conquered the title with a 6-3.