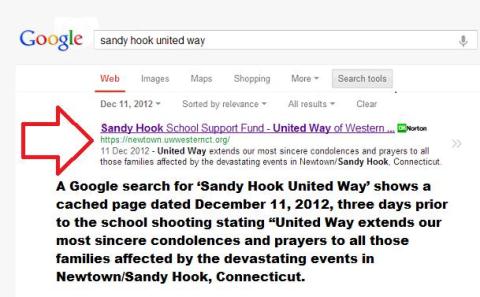 Sandy Hook Victim Hoax Update: 15 Jan, 2013: A a graphic was circulated of a snippet of a Google search result seemingly showing that the United Way was offering condolences to the victims of the Sandy Hook shootings on the web on 11 December 2012, three days before the shootings took place:

However, the United Way did not offer such condolences on the web until 15 December 2012, the day after the shootings. The dates prepended to Google search result entries are imprecise and do not always accurately reflect the date on which the referenced material first appeared on the web. By using a date-restricted search, one can find many web-based examples of references to the Sandy Hook shootings which Google’s search results date as having been published prior to the actual date of those shootings: 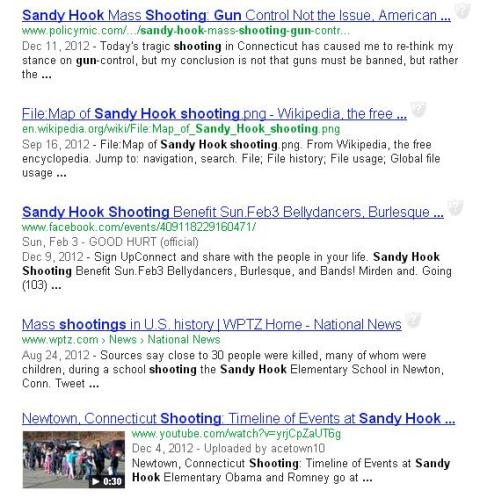 A widely circulated video purported to show many contradictions in facts surrounding the Sandy Hook shootings which established that the incident was a staged “hoax”:

The information presented in this video is a mixture of misinformation, innuendo, and subjective interpretation, such as the following:

In the immediate aftermath of the terror and tragedy of the Sandy Hook shootings, there was naturally a great deal of confusion among witnesses, police, and the news media about subjects such as the number of shooters involved, the identities of those involved, and the number of guns used. It’s hardly surprising or revelatory to note that some witnesses gave contradictory statements, that police initially followed up on the possibility of multiple shooters, or that the news outlets reported inaccurate information. All of this is typical in the crush for information from the news media, public, and relatives of victims that follows in the wake of disasters involving large numbers of deaths.

The seeming contradiction over how the accused shooter, Adam Lanza, could have used a Bushmaster AR-15 rifle in the shootings when that same weapon was supposedly found locked in the trunk of his car afterwards was cleared up a few days later. The weapon found in the trunk of Lanza’s car was a shotgun, not an AR-15:

Adam Lanza brought three weapons inside Sandy Hook Elementary school on December 14 and left a fourth in his car, police said. Those weapons were a Bushmaster AR-15 rifle and two handguns — a Glock 10 mm and a Sig Sauer 9 mm. In the car he left a shotgun …

The answer to the question arising from the initial misidentification of Adam Lanza with his brother Ryan, about Adam Lanza “could possibly have Ryan’s valid ID if he has not seen him in years?” is a one simple one, provided by Ryan Lanza himself: “Ryan told police that his brother … might have had his ID even though they had not seen each other in two years.” Ryan had last seen his brother in 2010, and many forms of ID are valid for more than two years.

Gene Rosen, the main who sheltered in his home six children who escaped from the shootings at Sandy Hook Elementary, did not, as claimed by the video, take in a group of kids who had been unquestioningly left with him by a bus driver and then keep custody of them for half an hour without contacting anyone or ascertaining what had happened to them. Rosen and the bus driver stayed with the children, elicited what had taken place at the school, obtained and called emergency contact numbers to reach their parents, and took them to authorities at a nearby fire station:

[Rosen] went in his garage to feed the cats and when he came out he saw six children sitting in a circle on his front lawn.

The six first-graders somehow had escaped from Sandy Hook Elementary School as a gunman shot and killed 20 young students and six educators.

They ran down Dickinson Drive and around the corner to Rosen’s house on Riverside Road — less than half a mile away. They had just seen their teacher die.

Rosen invited the children and a bus driver who was with them into the safety of his home.

Two of the boys sat on a rug in front of the couch, Rosen said, and suddenly they began to talk.

The other boy joined in, “He had a little gun,” Rosen recalled the boy saying, “and a big gun.”

A girl also began talking. She said she saw blood coming from Soto’s mouth, then the girl fell to the floor, Rosen said, and the narrative stopped.

The children with Rosen knew their phone numbers, but [their] parents were not home. The bus driver called a supervisor and obtained emergency contacts for the parents and more calls were made.

Parents of four of the six children were reached and learned their children were safe. They rushed to Rosen’s house, he said. After reuniting the children with their parents, the group walked to the firehouse next door, where students were being accounted for.

Urban Legends Reference Pages © 1995-2013 by Barbara and David P. Mikkelson.
This material may not be reproduced without permission.
snopes and the snopes.com logo are registered service marks of snopes.com.