Lindsay Lohan Completely Out of Control: When it seemed that Lindsay Lohan began to focus with the release of her new album, ‘Liz & Dick‘, the young actress has returned to give much to talk about with herlatest scandal. Lohan has once again been arrested for assaulting a girl in a nightclub in New York. 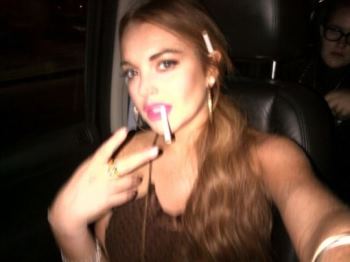 On Thursday, Lindsay was in a nightclub and took hours drinking and, according to the average American ‘Radar Online‘ also using cocaine.

The source that informs this portal ensures that Lindsay was “completely out of control.”

That’s when a girl came up and asked for a picture with her. Lohan declined very sharply and the fan, to be answered with such bad ways, turned to her circle of friends.

However, the actress was very upset and pushed her on the way to the bathroom.

“Lindsay was looking for fight. She hit the girl on the face of a sudden, nobody saw it coming. Went crazy, I was kicking and screaming, cursing and spitting girl. Seemed that the girl wanted to fight back, but was too scared the shock to react, “says a witness ‘Radar Online’.

She was arrested and charged with third-degree assault by New York police around 4 am. It is the second time that Lohan is arrested and hopes to avoid prison by a voluntary admission into rehab for six months, which led her begging to the agents to do in a while.

With her accumulated crimes could face a penalty of up to 237 days in jail, but due to the saturation of the prisons of Los Angeles, would have to serve only 25 percent of the sentence. Lohan hopes to change this sorry for rehabilitation

Dina Lohan, the mother of 26-year has issued a statement calling for respect for family privacy. We also wanted to show support for her daughter, “our family’s ties are deeper and stronger in difficult times and I am more than proud of all my children love to give.”

It also ensures that supports her daughter at all: “We are there to support you unconditionally. Many thanks to all who have expressed concern for my daughter.”

This news comes after the information you post ‘TMZ’ claiming that she drinks two liters of vodka a day, rising up from lying down.

Shall mature? Someday this young actress?