WhatsApp Suffers a Technical Failure: WhatsApp has confirmed that the error that appears in the states of the contacts application is due to a technical failure. This has led to several rumors for Wednesday in the form of chain, ensuring that the app had been hacked or it would start charging for each message sent. 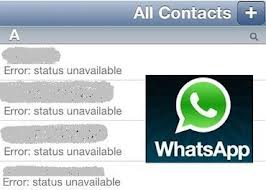 The instant messaging service WhatsApp on Wednesday became abuzz with rumors about the service itself. Through Whatsapp, and even social networks, users spent several messages to contacts in the chain which ensured that Whatsapp was hacked, because in the states of the contacts in the application appeared on “Error: status unavailable“, by which there was a security flaw that allowed access to private pictures, or Whatsapp would charge users $ 0.01 each message sent.

In this chain of posts was assured that the error in the state meant that users Whatsapp account was hacked and that by sending the message to 10 contacts “Light” service would be blue instead of red.

Another message stated that the “status unavailable” meant that from next November 30 Whatsapp become a paid service for those who forwarded this message to 20 contacts.

These same chain messages have been previously used in other types of networks and services, such as messaging service Microsoft Windows Live Messenger.

However, through its official Twitter account, the team ensured that the message Whatsapp tab on Whatsapp State, “was not currently available“, but still working on it to fix it.

Regarding the payment service becomes, Whatsapp makes clear both the iOS App Store and Android as on their website. For iOS users, application charges. Users can download it through the App Store for 0.89 euros.

However, for users of Android and other platforms (Android, BlackBerry, Windows Phone, and Nokia) is not paid by downloading the app for the first year. Then you can decide whether to continue with the service or not and subscription costs $ 0.99 per year.

At present, some users still being seen the message while others can now see the status of your contacts as usual.

Hurricane Sandy Evolution Can be Seen by Google Maps