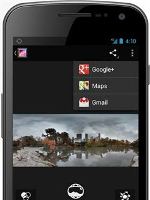 Google Maps Lets Users Upload 360 Degree Images of Android 4.2: The last application for Android OS camera 4.2 allows not only to pan as the company, but also upload them to Google Maps. Thus, users of Google can help in mapping platform with 360 degree views, the style of which offers Google Street View.

Google Photo Sphere is an application that created with great precision at 360 degree panoramic images by automatically overlapping the edges of each frame. Photosynthesis is similar to the popular Microsoft application.

Taking Photo includes a plurality of views, comprising the sides, up and down and around, to create an authentic experience in 360 degrees. The result is similar to that obtainable with other panoramic apps designed to create, as the equivalent of Microsoft, Photosynthesis.

But this app is included in the latest version of Android, Jelly Bean 4.2, includes the ability to upload the image to Google Maps. The images appear on the platform of virtual maps of the world most important as blue circles. When you click on them, open the user’s photo, with the shooting date and signature.

Can also access a virtual gallery displaying the catalog of all the images shared by internet users.

The difference to the images that users upload from Panoramio, is that Photo Sphere integrates a 360 degrees, similar to that provided in Google Street View.

With this tool, photo enthusiasts can share more realistic images of various parts of the world with others. But, in addition, may compete directly with some of the 360-degree panoramic offered by Google Street View.

To do this, you must be a user account on the social network in Mountain View, Google+, through which the image will be loaded in Google Maps.

The application is available in the latest version of the Google OS, Android 4.2.

Google at an event yesterday presented their latest gadgets, the ‘Tablet‘ Nexus 10, along with a 32 GB version of the Nexus 7, the ‘Smartphone‘ Nexus 4 and the latest version of Jelly Bean, and other applications.